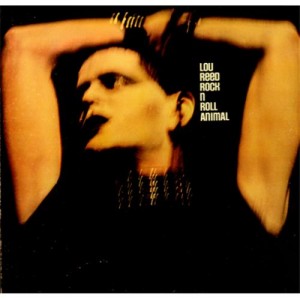 One of the most perplexing albums that Lou Reed released and a turning point in his career as he seemed to change musical direction out of nowhere. What was most fascinating about this record was how he left behind the gritty cabaret of Transformer and Berlin for virtuoso rock musicians playing flashy lead solos. After Transformer had been produced by Bowie and Ronson in 1972, and had included the Top 20 US hit Walk On The Wild Side, the uncommercial but latterly recognised 1973 masterpiece Berlin, received bad reviews, and probably disillusioned by the reaction to his contemplative, angst ridden, tragic drama, he presented something less challenging for the critics, something more commercial, something more accessible – a live rock record. Rock n Roll Animal seemed to steadfastly close the door on The Velvet Underground ethic. The duelling guitar intro of Steve Hunter and Dick Wagner – proper guitar players, were the antithesis of Reed’s approach to his own music. it could almost be Thin Lizzy until after the applause you hear the New York drawl, Standing On The Corner….and then of course it is something else altogether, but never have three chords been so exquisitely executed.

You can hear the guitarists tuning down to a C for the start of Heroin. The Velvet Underground by session musicians, was he being ironic? Prakash John’s bass sounded more like he was jamming with Weather Report than Lou Reed. But it all works, mostly because of the great songs. You wonder if Lou Reed was experimenting with normality and seeing if he could make it weird anyway – by simply being him. Well, the answer to that is yes he could, but with a great band – the dynamics, the guitar tones. The organ on Heroin comes in half way through the song, it’s almost the prog version! You wonder if Rick Wakeman and Steve Howe from Yes who played on his first album actually did have an influence on him, although the critics would have you believe that it was all a confusing mistake. Rick Wakeman did after all also play on Hunky Dory and at 12 minutes long this song is an epic length.Of course this is not prog, it’s raw Rock ‘n’ Roll just like we like it. But having made  albums in Europe with English virtuosos, perhaps the idea of recording with American virtuosos appealed to him. Latterly in his career he had excellent players throughout his albums and always with an American sound.

Mick Rock’s iconic photograph of Reed on the cover of Transformer made him look like a glam Frankenstein and on Rock n Roll Animal like a sado-masochistic dungeon master. But who was he really and who was qualified to judge his music? Reed famously despised the critics, maybe he was just trying to confuse them or piss them off. The self-proclaimed intellectual critics can’t seem to deal with clever guitar solos and when you put them into The Velvet Underground, then it must have had them sharpening their pencils. (Having said that they panned Berlin when it came out and that record was the opposite of this one and more in keeping with Reed’s musical evolution in the wake of The Velvet’s garage art rock).

The songs on the companion Lou Reed Live 1975 (the remainder of the concert) seemed  less suited to this R’n’R treatment. That is perhaps why these songs were released later as a different live record.  But in releasing Rock n Roll Animal you have to admire the blatant disregard for anyone’s opinion and most of all the vision to see why musicians seemingly miles apart from you artistically is your reason to use them. White Light/White Heat with slide guitar solos? Really? Come on! Surely not. Lady Day is a Les Paul riff fest effortlessly flying around the fret board. On Rock And Roll it seems like the virtuosity doesn’t help it, like it needs less proficiency, a more primitive group to make it work, like it would better if it were dumber or more haphazard, although Lou Reed keeps it interesting by being him – and the end of the song well, it rocks! That was Lou Reed’s magic, playing himself in any situation, he could sing/speak over Beethoven and it would still work. After making his last album with Metallica, another tangent, who knows where he would have gone next?  No doubt somewhere perplexing.