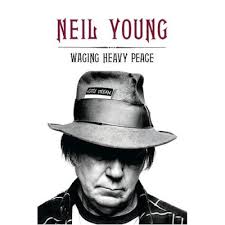 Neil Young’s memoir was released in June this year and along with Pete Townshend and Keith Richards, the queue on my shelf of iconic musicians books is getting long next to the fiction. Only Bob Dylan made me stop everything and read his book the day it came out. I thought that I should at least put this book in everyone’s mind having seen Neil Young live with Crazy Horse earlier this year. So this isn’t a review it’s just a reminder that the book is out and you might want to get it. It’s so cheap on Amazon- £5 brand new, a steal. A little about the live show. Neil Young has always been one of my favourite guitarists and he played a lot of Psychedelic Pill with mega jams, opening with the first track on the album, the 27 minute Drftin’ Back. I mention this song because he sings about his book in the lyric. How he used to like Picasso and then the corporate giants turned him into wallpaper, his hatred of Mp3’s where he mentions you only get 5% of me and you used to get all of me, but he tells us in the lyric that he’ll write about it in the book. If you go to his website – www.neilyoung.com – it has big pictures of the Earth and warnings about the killing of the planet – a fascinating man with a conscience. He has been trying to turn his gas guzzling 1959 Lincln Continental into an environmentally friendly car.  As a teenager I played Harvest and After the Goldrush over and over. Later Rust Never Sleeps and American Stars And Bars and in-between Zuma and Everybody Knows This Is Nowhere as well as going back to the first album and On The Beach. There have been some great archival releases in recent years, Live solo at Canterbury House in 1968 shortly after Buffalo Springfield had split up, Crazy Horse Live at The Fillmore 1970 with Danny Whitten playing guitar and Live solo At Massey Hall 1971. But this isn’t about the music, this is about the book so go buy it and then tell me to go buy it.