It is rare to find a film which is both elegant and tough; corrosive yet compassionate; visually exciting and yet meaningful; brilliant and profound. Rarer still is the film which deals with moral problems on any but a superficial level. And that is why The Servant is a masterpiece. 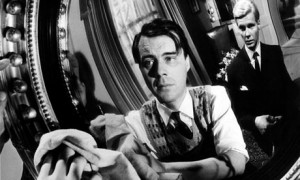 The Servant was based on Robert Maughm’s novelette from 1948, (Somerset Maughm was his uncle) adapted for the screen by Harold Pinter and directed by Joseph Losey. It starred Dirk Bogarde, Sarah Miles, Wendy Craig and James Fox. Pinter worked on three films with Losey – Accident 1967 and The Go-Between 1970 where a certain band from Brisbane may have got its name. It’s the disturbing story of an upper class wealthy Londoner (James Fox)  hiring a working class Northerner  (Dirk Bogarde) as a manservant. It’s a brilliant pyschological drama in which the issues of class are closely examined and ultimately the roles are swapped between the damaged protagonists.

With music by Johnny Dankworth and a smoky song All Gone sung by Cleo Lane (his wife).

Davy Graham also appears in the film as himself playing Rock Me Baby. The song appear on his album Folk, Blues And Beyond.