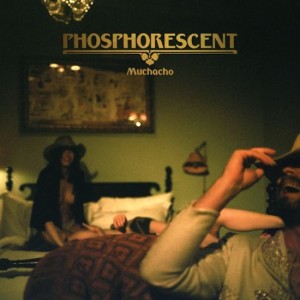 Matthew Houck’s Phophorescent begins with choral harmonies reminiscent of that new breed of American arty bands with a guiding light like Bon Iver. The track called, Sun Arise (An invocation, an introduction), could also be the first track on a new Fleet Foxes record, despite its sequencer motif and machine rhythm. I have made the second track, Song For Zula, Video Of The Day – insightful lyrics evoking hurt and recovery. It’s an epic track with banks of strings and melodies circling each other with a familiar chord sequence. You think you have the measure of this record as Ride On/ Right On appears with machines and insistent bass, distant grinding guitar (and yelps), but then by Terror In The Canyons (The Wounded Master), Houck’s gives his heart away with that intrinsic country soul that lives inside of him. (Houck is from Alabama). If this was an Emmylou Harris track you wouldn’t be surprised – Harris was born in Birmingham, Alabama.

This jump from odd arty, studio machines to country is what makes it American. The mixture shows that despite the world we live in being full of new fangled devices, the old traditions die hard. It continues with the next track, A Charm/A Blade, pedal steel but in a thick and busy production and with more yelps. In fact the album has started as one thing and then become another as this new country with reverb becomes the centre point of the album. Muchacho’s Tune is all story and buried pedal steel but with a bass line that sounds like a keyboard instead of a bass, playing a line that twenty years ago the bass player would have played without question, that’s progress. Trumpets and guitar noodling to the end.

A New Anhedonia probably typifies this new ‘space country’ best, fragile but vast, like a slow caravan across the plains looking up at the UFO ridden night sky.

The Quotidian Beasts is the most perplexing, it sounds like they let someone in to the studio who didn’t know the song, playing random wrong notes all over the track. Is it supposed to create tension or is the jarring another device to signal a new approach to music itself?  It’s like a cross between Morning Dew and Knockin’ On Heaven’s Door and a glass of sour milk.

Back to country, pedal steel and Mexican trumpets with Down To Go. This record is talking clearly to someone as Paste magazine made it the 2013 album of the year. Is it the uncertainty of the style, the messing with tradition or the obviously heartfelt lyrics that inspire? The production is also something else, a mixture between organic and machine sounds behind Houck’s cracked voice.

The album finishes how it started with, Sun Arise (A koan, An Exit), the same musical theme as the beginning.

This record penetrates through uncertainty, a mysterious blend of honesty and technical confusion.

And the dictionary definition of Koan is: a paradoxical anecdote or riddle, used in Zen Buddhism to demonstrate the inadequacy of logical reasoning and to provoke enlightenment.

That just about says it all.