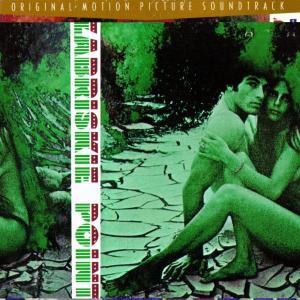 Most famous for containing unreleased Pink Floyd songs, Zabriskie Point, like Obscured By Clouds And More, may at one time have been a complete Pink Floyd album. On the 1997 re-released double CD, four extra unused songs are included. (Plus four unused Jerry Garcia pieces). Best of all is the You Tube link below, this takes you to an hour and fifteen minutes of outtakes that includes, The Violent/Violence Sequence eventually morphing into Us And Them, used three years later on The Dark Side Of The Moon 1973. On the soundtrack album, Come In Number 51 Your Time Is Up is a re-working of Careful With That Axe Eugene with a different title.

David Lindley’s Kaleidoscope and Jesse Colin Young’s, Youngbloods also appear. Some noodlings by Jerry Garcia and an except from arguably the most famous Grateful Dead song Dark Star. The fans referred to the song as “It”, perhaps like actors refer to Macbeth as “The Scottish Play” so as not to curse the performance by uttering its name, or in this case so not to tempt a non-performance of the song.

Patti Page’s, Tennessee Waltz was one of the biggest selling singles of the 20th century. Page who died January 1st 2013, was a huge star in the fifties and sold over 100 million records. Outside her genre she would be best known for the novelty song, (How Much Is that) Doggie In The Window.

In the film we hear Roy Orbison and The Rolling Stones’, You Got The Silver, (From Let It Bleed 1969), but neither are on the the soundtrack album and Orbison isn’t credited in the film. Jim Morrison also submitted, L’America but it was rejected. It appeared on The Doors’ album LA Woman 1971.