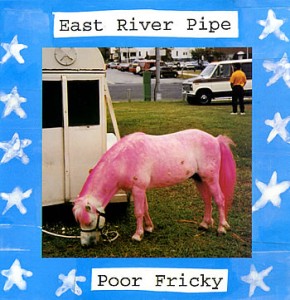 East River Pipe (the name came from a sewage pipe pumping raw waste into the East River) is the creative vehicle for F.M. Cornog who also works at Home Depot. This is the ultimate in dedicated home recording and sincerely, he is only in it for the music. His albums are slices of real life from the point of view of a melancholic, ex homeless drug addict and alcoholic that with the help of his now wife Barbara Powers and her label Hell Gate did actually rescue him from the street. He/they managed to get it together and turn a disaster into a collection of smart, meaningful and poignant records. This anti pop star has become known as a talented eccentric, but really when you look at it – it’s everyone else who is weird! Domestic 8 – track recording in the front room of his apartment and a New York magazine interview (see link below) – one can only imagine the phone calls as they planned a meet around his Home Depot schedule.

Poor Fricky is the second album, released in 1995 and opens with Bring On The Loser – the song, like him is a gem. Sad guitars with dangerous anti American lyrics “I know you wanna win but I don’t really care”. I can’t find his lyrics anywhere on line so I’m trying to pick them out from the album on Metal Detector he sings “Put that old bracelet back because you know you should” Is it a desire for material things and stealing them”? I don’t know .

Two songs of two minutes follow: Here We Go has a ‘variety show’ organ sound and might have been a hit in the sixties had it been written then. Put -Down has a moody keyboard setting up a song about domestic mental torture – in two short minutes he sings about the real troubles that people have their whole lives.

Lightening up a bit with the tongue in cheek Superstar In France. It must seem so far away to him from Home Depot in New Jersey, daydreaming about being the rock star on the radio who in reality he doesn’t actually want to be. On this subject, Keep All Your Windows Tight Tonight might have been a hit for a mega star should they have covered it. His songs have been covered by lesser known as well as famous artists  including David Byrne, Lamchop, The Mountain Goats and Okkervil River. Ah Dictaphone might be beautiful and might sound like an odd subject but if he’s singing to his creative tool – it might be considered rather important – Brian Wilson might have done a great version in the sixties. Walking The Dog is everyday psychosis, “I’m walking the dog and I’m scared in the usual way”. So he can’t really be famous in the traditional way – because he’s not the type.

The next track is called Marty! And I can hardly understand a word he is singing, uptempo with feedback and crazy guitar, the song seems to have real purpose with its incessant repeating vibrating keyboard. All his songs are like this, on the way somewhere, saying something, pointing out some truth or other, unfortunately in the case of the song with my name…I can’t for the life of me understand what it is all about.

Crawl Away has that variety keyboard again, possibly a casio. The song has a great line: “Laugh at them but you’re in their world”. And finally I found a lyric on line (with a lot of mistakes) Hey Where’s Your Girl – I guess it might be another suppression of your partner song or is it darker than that, is it murder?:

The song has a guitar part that Annie Clark from St. Vincent could have written.

Powerful Man is about the desire of the driven, “I wanna build a highway across the desert, I wanna fly a spaceship to the sun”, “I really got it going….I really got it going… I really got it going”…At this point he has to say…’on’! But he doesn’t Ha Ha! Knowing his style one imagines he is not talking about himself, he is being sarcastic or simply pointing out what some people need to to feel worthy. Cornog doesn’t need this, he needs a loving wife a child, the security of a real job and the freedom to spill out his wry remarks and alert observations on to a world that will mostly ignore him – but not everyone.

As the album finishes with When The Grounds Walks Away, I imagine this song being played in a disco by the biggest band in the world, nobody knows who really wrote it. Suddenly an earthquake hits, the Earth opens up, the sea falls into the cracks, society’s lies are washed away, all that is left is F.M. Cornog, his family and his truths and who ever is left is finally listening.