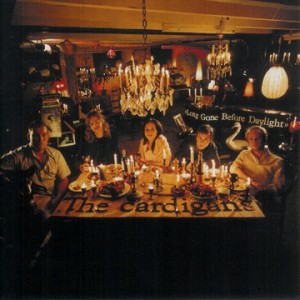 It was five years between, the best two and radically different Cardigans’ albums – Gran Turismo 1998 and Long Gone Before Daylight 2003. Gran Turismo is a more studio prepared, moody electronics album (although it has guitars too) but with Long Gone Before Daylight they gave their pop an unlikely and unexpected mellow yearning. The band had grown since the early days of Nina Persson’s cute look and the catchy pop of Lovefool from their internationally successful album, Life 1995. At some point they had made the decision to start experimenting with styles and Gran Turismo spawned attention with My Favourite Game and Erase And Rewind. But instead of following up this new found success in the wake of a new direction, they worked on solo projects. Per Svensson, guitarist and composer made a Swedish language side project called Paus with Cardigans’ drummer Bengt Lagerberg and Swedish pop band Kent’s lead singer Joakim Berg. Nina Persson made a record under the name A Camp. Bassist Magnus Sveningsson made a solo album under the name Righteous Boy. Out of the blue and a whole five years later they released the most entrancing and relaxed organic album with stunning vocal performances by Nina Persson and a set of songs written by Persson and Svensson that were lyrically insightful and melodically intoxicating.

The album opens with Communication – a haunting melody with Svensson’s creative guitar parts, the bands soft sensitivity, strings and a tender lyric. Persson sings like a lost relative of Karen Carpenter and has an engaging soft command that simply melts you.

Oh, I need you, you want me
But I don’t know
How to connect, so I disconnect
I disconnect

You’re The Storm, the second single from the album is a lovely piece of breezy pop with a James Honeyman-Scott style guitar solo (like on Kid by The Pretenders). Lyrically demanding her lover to come and sweep her away in an explosion of passion. A memorable melody and arrangement, a real foot tapper. You can hear that this band likes playing together, is used to playing together, there’s a chemistry and this is what makes the songs on this album sound so effortless.

Some meaty guitar tones on A Good Horse but it’s never out of hand – it’s organic, restrained, considered, cleverly arranged and Persson’s voice goes to places you didn’t know about.

And Then You Kissed me starts with Lars-Olof Johansson’s organ setting the song up and sending it on its emotional journey, an acoustic guitar takes over and Persson comes in with what is either the most direct lyric or clumsy English and I can’t for the life of me decide which it is? ( having an English speaking husband I can only imagine it’s the former). But the song itself is another beautiful piece of songwriting and she expresses confidence and character in her voice till you are hanging off every word. In the middle of the song she sounds like Nancy Sinatra and then some of the most exquisite tones that give you goose bumps. Her inner metaphorical landscapes make it easy to ride with her on her lyrical train of thought.

Couldn’t Care Less drifts onto the record like an ocean wave hitting a tropical beach. I can hear Sade singing this song – sophisticated, sparse drum and keyboard behind reverb guitar, an achingly simple bass and cymbal washes.

Please Sister’s soft piano and organ with wah wah guitar and Person’s vibrato inhabit another strong song. I imagine Dusty Springfield singing this one. The songs are that good, they were just born in the wrong era for them to be considered classics. Even with this album’s successes I still consider it to be terribly underrated.

For What’s It’s Worth is the album’s first single and confirms Persson’s self confident and sexy delivery enticing hopeful lads around the world begging her into their dreams. It’s  just all so naturally expressed, her voice is soaring in acoustic pop heaven, Svennson’s guitar parts are both interesting and catchy, the band floats on air.

Lead Me Into Night, lilts its way into a semi-auto biographical story of Persson’s lover, whether truthful or imaginary, the story is convincing and draws you in so we wish for happy endings to her encounters.

Live And Learn, the third single is a slow head bopping strum and this shows their skill as writers as they make what might be a throwaway work with a strong melody and a lyric of a wayward girl learning some lessons.

Feather’s And Down hope for an alcoholic friend, a compassionate plea to stop drinking with promises of “Feathers and Down” instead of “blankets of sorrow”. Great guitar piece in the middle.

No sleep ends the album like a lullaby of peace.

Two extra tracks, Hold Me is just a few seconds but If There is A Chance is a smoky low key bonus track that is wonderfully slow.

Long Gone Before Daylight is a captivating, heartfelt masterpiece. Sensitively played, beautifully sung and with so many great songs it makes you wonder what magic was in the air when they wrote and recorded this record. My album of the year and I still love it to this day.