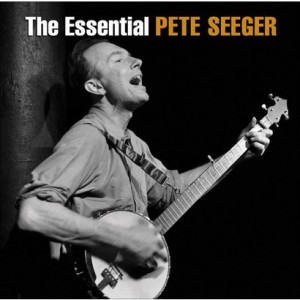 Pete Seeger’s influence in the world is difficult to measure and Joan Baez  has been quoted as saying “We all owe our careers to him”. Protests singers, folkies, singer-songwriters like Dylan, Phil Ochs, Dave Van Ronk, Tom Paxton, Don McLean, Bruce Cockburn, Arlo Guthrie, Loudon Wainwright lll and hundreds of others all recognise his striving for the truth in song. Seeger was a member of Almanac Singers between 1940 -43 that included Woody Guthrie and of The Weavers in the fifties. The Weavers had many hits including Leadbelly’s Goodnight Irene that stayed at Number 1 for 13 weeks. Check out the story of Leadbelly in the middle of the song:

Seeger was famously blacklisted for Un- American activities but survived the inquisition to become a hero of free speech. This is a section from his statement (c/0 Spin magazine):

What is your profession or occupation?

Well, I have worked at many things, and my main profession is a student of American folklore, and I make my living as a banjo picker-sort of damning, in some people’s opinion.

May I ask you whether or not the Allerton Section was a section of the Communist Party?

I am not going to answer any questions as to my association, my philosophical or religious beliefs or my political beliefs, or how I voted in any election, or any of these private affairs. I think these are very improper questions for any American to be asked, especially under such compulsion as this. I would be very glad to tell you my life if you want to hear of it.

What is your answer?

I feel that in my whole life I have never done anything of any conspiratorial nature and I resent very much and very deeply the implication of being called before this Committee that in some way because my opinions may be different from yours, or yours, Mr. Willis, or yours, Mr. Scherer, that I am any less of an American than anybody else. I love my country very deeply, sir.

Why don’t you make a little contribution toward preserving its institutions?

I feel that my whole life is a contribution. That is why I would like to tell you about it.

I don’t want to hear about it.

Did you participate in a program at Wingdale Lodge in the State of New York?

Again, I say I will be glad to tell what songs I have ever sung, because singing is my business […] But I decline to say who has ever listened to them, who has written them, or other people who have sung them.

Did you sing this song, to which we have referred, “Now Is the Time,” at Wingdale Lodge on the weekend of July Fourth?

I don’t know any song by that name, and I know a song with a similar name. It is called “Wasn’t That a Time.” Is that the song?

Did you sing that song?

I can sing it. I don’t know how well I can do it without my banjo.

I want to know whether or not you were engaged in a similar type of service to the Communist Party in entertaining at these features.

I hand you a photograph which was taken of the May Day parade in New York City in 1952, which shows [a man] in a uniform with military cap and insignia, and carrying a placard entitled CENSORED. Will you examine it please and state whether or not that is a photograph of you?

It is like Jesus Christ when asked by Pontius Pilate, “Are you king of the Jews?”

Let someone else identify that picture.

Did you entertain at functions under the auspices of the American Youth for Democracy?

The answer is the same, and I take it that you are not interested in all of the different places that I have sung. Why don’t you ask me about the churches and schools and other places?

That is very laudable, indeed, and I wish only that your activities had been confined to those areas. If you were acting for the Communist Party at these functions, we want to know it.

I said that I should be glad to tell you about all of the songs that I have sung, because I feel that the songs are the clearest explanation of what I do believe in, as a musician, and as an American.

He was a political activist, anti-war campaigner, environmentalist, singer-songwriter and banjo player – teacher, student of American folklore and champion of recycling. To know the full extent of his exploits go to the link below:

Seeger also wrote many famous songs including Where Have All The Flower’s Gone (with Joe Hickerson) recorded by The Kingston Trio, Marlene Dietrich in English, French and German, Dalida in French, Peter, Paul and Mary, The Searchers, Roy Orbison and many more.

If I Had A Hammer, was recorded by Peter, Paul and Mary

Turn! Turn! Turn! was recorded by The Byrds, Nina Simone, The Seekers, Jan & Dean and as the B side of Those Were The Days by Mary Hopkin. There are also many versions of this song.

The Essential Pete Seeger is an album that introduces you to Pete Seeger and is a real treasure. His songs are pleas, stories – hopeful hymns for the common man.

Seeger was also responsible for many guitar and banjo tuition albums, children’s records as well as his own vast catalogue.

Seeger was also credited with the adaptation of We Shall Overcome that has become the stirring anthem for the civil rights movement.