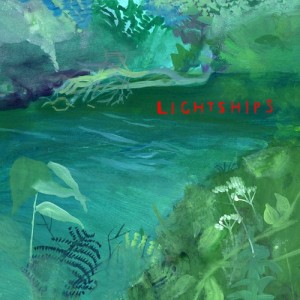 Lightships is the solo project of long time Teenage Fanclub co-singer-songwriter, bass player Gerard Love. Norman Blake formed Jonny with Euros Childs from Gorky’s Zygotice Mynci, Raymond McGinley joined Snowgoose and recently Blake has formed another band The New Mendicants with Joe Pernice. All doing their own thing outside the cosy walls of Teenage Fanclub, it’s Love’s record that is the most beguiling.

Two Lines opens the album and it’s pretty, pretty guitar line, pretty sound, pretty melody and soft vocal – and why not. It’s pretty hard to make music as sweet as this without being too sweet and Love manages to convey warmth rather than sugary sap.

Muddy Rivers reminds me a little of Pure by Ian Broudie’s Lightning Seeds, there’s something in the riff, but love’s sound is so soft and carefree that it comes from another place altogether, even though the two bands might be considered to be from the same genre. There’s all all kinds of odd sounds in the background, spacey guitars, flutes, harmonies and pitter-patter feather light drums.

Sweetness In Her Spark has the same idea of spacey guitars, arpeggio guitars, riffy guitars but all whirling around together in a happy soup. As Teenage Fanclub’s bass player, Love is basking in the melodic heaven of being the guitarist, bursting with ideas, he just can’t get them out quick enough.

Every Blossom is next and I’m hearing The Free Design sixties Easy Listening Oop or The Lettermen or The Sandpipers – super light and melodic, not a squeaking pedal or a buzzing amp for miles around.

Silver And Gold is so delicate in the verse and softly sung and so high that it’s almost a sixties girl singer. Echoey guitar and when the band comes in an uplifting beautiful melody and some darker fuzz guitar but only as a texture, never overpowering.

The Warmth Of The Sun has the sound of a ticking clock and xylophone and flute amongst the tremolo guitars – it’s so mellow and pastoral that you feel that you could dream away the day, have a snooze, talk to the cat, make 37 cups of tea and not have a care in the world.

Girasol, is all effected guitars and harmonies and if you don’t know what ‘Girasol” means, well it’s a type of opal with a reddish glow and that just about describes the album perfectly – the album most definitely has a reddish glow.

Stretching Out could be a Paul Simon song from the sixties, warm, busy bass and even though there’s a lot of rolls in the drum pattern they are so lightly hit and so lightly mixed that they don’t encroach on the song at all – in the same way they didn’t dominate The Byrds and other melodic folky sixties bands.

Last song is Sunlight To The Dawn and it completes the happy face of the album. Most of the song is the outro, it’s like a long resistant goodbye – he just doesn’t want to leave, he is loving playing that guitar and I just want his Mum to knit me a jumper.

All I can say is that Gerard Love is one mellow dude and I  imagine he must be one of those quietly spoken Scots that you see on quality BBC TV series. Electric Cables is truly a lovely album, a pretty album, he’s got more melodies than maladies and what a sweet breath of fresh air that is.