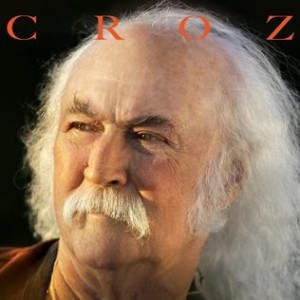 David Crosby’s ‘September Of My Years’ recorded in his son’s home studio, released independently and Crosby’s first solo album in 20 years. There’s a contrasting easy feel and deep lyrical perspective on both halcyon days and where the world is going now – it’s an honest talented singer-songwriters observational artistic expression. There’s something challenging about the album, not for us, the listener, but for him as the artist – it simply doesn’t suck, it’s not boring, it isn’t overtly sentimental in looking back on a crazy life and it certainly isn’t complacent. This may be a result of his son James Raymond who seems to have got the best out of him, pushed him to be as good as he can be. Django his other son took the album cover photo.

Mark Knopfler appears on the opening track What’s Broken, Croz’s harmonies stand out as his trademark.  Wynton Marsalis appears on Holding Onto Nothing, heavy friends you may think – but no, just musicians he respected who he asked if they’d play on his tracks. Of course they said yes but he seems eternally grateful that they responded with such inspired contributions. Strangely it seems like he has surprised himself in the quality of this record? Can you imagine having a track record like his and being relieved that you actually made good!

But let’s face it, it’s a thin line with this breezy, sincere style. It could easily collapse into Yacht Rock (heaven forbid) or Mike Love’s often insipid take on the Beach Boys, but Croz delivers his sincerity in small thoughtful truths. The songs are strong, the arrangements are interesting and his voice softly commands attention.

It would be right to call this record, mature but it’s also a relief because it’s mature in all the right ways. It’s different generations working together (father and son) it’s also a surprise but equally it’s what we would expect of this political man, a campaigner for social justice, a talented singer-songwriter and self-indulgent survivor of his era (liver transplant, diabetes, heart trouble). Frankly it’s incredible that at 72 years old he is still with us after terrible (mainly self-inflicted) medical problems that have hindered him as recently as this year, postponing dates whilst he enters hosptial for an operation on his heart. Luckily for him and for us he is still here, let’s appreciate him through this great new album. And for those of you who didn’t know one of the oddest facts in R’n’R – Phil Collins paid for his liver transplant.