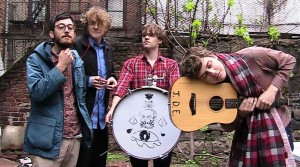 This is a song from Woods more experimental second album At Rear House from 2007. It features some great old animation and a different sounding incarnation of the band. The picture is later, from their middle period – in the short time they have been together (since 2005) they have released a healthy seven albums. You may have some catching up to do.