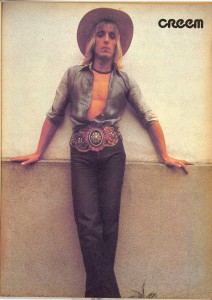 Mick Ronson on The Old Grey Whistle Test in 1975 performing Angel #9 from his Play Don’t Worry Album. Magic fingers, eternal sustain, tone all of his own and sadly not with us anymore. He died of liver cancer in 1993 at the age of 46. One of the world’s great rock guitarists, he just touched the guitar and it sang. Loving tribute here from The Guardian on the 20th anniversary of his death.