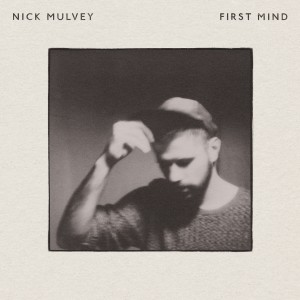 Who would want to be a singer-songwriter in 2014? Fierce competition from history might not deter younger people who can’t hear why Bob Dylan was/is important. His croaky later records and tuneless live shows are more about having an audience with him (as in an audience with the king) than they are about being in an audience for him to play to. His records from late seventies up to Oh Mercy are less than inspiring and his famous masterpieces are so far back in history that it’s not Dad’s record collection anymore – it’s Grandad’s. So you would forgive budding singer-songwriters for thinking that the competition is Ed Sheeran or David Gray or perhaps James Blunt. (Tom McRae seems to be on and off the radar).

Enter Nick Mulvey who surprisingly was once a founder member of Mercury Music Prize nominee, the Jazzy Portico Quartet – playing the Hang (a UFO shaped tuneful percussion instrument) until he left in 2011 to pursue his present singer-songwriter path. He went to study music in Cuba and met Portico Quartet whilst studying Ethnomusicology at the school of Oriental and African studies (not sure where, it isn’t clear).

This dramatic turn in favour of a new direction comes with mixed results. Singer-songwriters need many layers of magic to work at all – distinctive voice, lyrics that get under your skin, unique melodies and last of all perhaps adeptness on the guitar. We all know that great songs only need the guitar as an accompaniment unless it features as one of the focus points, as in the riff or the key part. Dylan managed to write hundreds of songs with four chords that all sound special (no real parts or riffs) – that’s his genius. When I listen to Nick Mulvey I can hear that somewhere in there something good is lurking but it’s a little worrying that it’s not yet fully realized. That effortless run of songs that say Paul Simon wrote as a young man, still stands as an example of the unbeatable sixties musical visionaries and word messiahs of the distant past.

Mulvey’s title track opener makes you realise that he is an adept guitar player, but the song sounds more like a hipster band from Brooklyn than an English singer-songwriter. That’s not really a critiscim but I feel like the pigeonholing damages him. He actually isn’t a singer-songwriter in the mainstream or alternative sense, he ‘s more like a band with one member. The mainstream singer-songwriters like Blunt and Gray have bands, I saw Tom McRae with a band – Ed Sheeran I’ve only seen playing alone (he’s quite good I thought) and then I wondered how can he be this successful – perhaps Nick Mulvey wonders too?

Fever To Form the second track makes me wonder whether he has enough of a distinctive voice  – I simply can’t imagine people saying “I love his voice” his songs maybe but not his voice – it isn’t even weird!

Some nice quick finger picking on April but the “Mmm’s he sings” that repeat through the album tonally suck the life out of the songs? This song is like a spacey acoustic Tim Burgess track (someone that knows he needs to be in a band).

Lyrically it’s interesting, although the lyrics sites have guessed at a word that’s not right and I can’t quite tell what it is?

Juramidam has an interesting rhythmic harmonics part and there he goes with his Mmm’s again but there’s something good here too but it’s not his voice – it’s the vibe.

Cucurucu is next and the first single from the album, based on a D.H Lawrence poem from 1918 – he’s at it again with Mmm’s, but it’s a great song. It’s him doing what he does best, a twist in the melody and a catchy rhythm, it’s in the  realm of the mainstream version of the singer-songwriter and the accompanying video has some beautiful images.

Alisa Craig has a slightly oriental melody but I can’t get away from the Charlatan’s connection or some Manchester band in the melodies – a melodic monotone but with acoustic guitar and no real drummer. It’s the percussion man in him that runs through his head and adds groove to this acoustic music, but guess what, he’s Mmmming again and it completely ruins it for me because it’s all over the record and frankly he’s not great at it. He is desperately in need of a producer.

Meet Me There, is the second single with another National Geographic video and skipping rhythm – don’t even ask me if he starts with the Mmm’s again? Some great string ideas, he’s all potential but he’s simply just not there yet, the mood is right but the execution isn’t.

Nitrous has interesting odd loops of strings and noises and following track Venus has the guitar arpeggios are back and yes the Mmmm’s are back too…as I listen through I get the musical vision as in the rhythms, the arpeggios and the subtle loops but if he doesn’t get someone to produce his vocals he will not tap into the magic and by the way, the  penultimate track The Trellis starts with…Mmmm’s that reoccur in the song – using the same idea constantly that didn’t work the first time.

As the album ends with another good musical idea, some African influenced guitar part and rhythm, I wonder have I ever heard an album where there’s so much unrealized potential. Nick Mulvey could be something great if he found the right collaborator – and before you ask – yes he is Mmming again to the death.