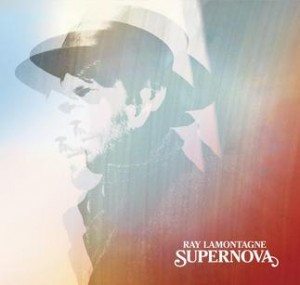 After Ray LaMontagne’s debut album Trouble became singer-songwriter album of the moment in 2004/5, I investigated by buying it. Like David Gray’s breakthrough album White Ladder, I found it to be rather middle of the road and for all the talk of his amazing voice I felt like his lyrical content was a little too earnest and for me what the voice was actually singing about made me lose interest. So, good singer-songwriter, not for me – his appeal spread and in 2006 he released Till The Sun Turns Black and it passed me by. For some reason I picked up Gossip In The Grain in 2008 and felt exactly the same as I did about Trouble. Consequently 2010’s God Willin’ & The Creek Don’t Rise also passed me by. As I was in the habit of buy one, ignore one, buy one ignore one, it was time to try again and the oddest thing happened – I immediately liked it. Unfortunately the reason for this change of heart was because – it doesn’t sound much like Ray LaMontagne.

Supernova is almost a retro tribute album to the sixties with less focus on his voice and more on the song style and production with sixties melodies and arrangements (Smashing sounds like  a track from Pink Floyd’s first album). Why? How? What made him shoot off in this odd direction? I can only imagine that he got sick of his own sincerity? That and the involvement of the producer – Dan Auerbach from The Black Keys. Still, it’s so consciously sixties that unless he was brainwashed he certainly must have had some kind of major rethink.

Lavender the album’s opener is like a track from the early California Paisley Underground, The Rain Parade, The Three O’Clock & The Bangles all rolled into one. The reverb on his voice takes your attention away from ‘that’ voice and he sounds like any sixties singer, a cross between Colin Blunstone (almost) and a Peter and Gordon/Peter Noone breathy hybrid gone pyschedelic.

He’s almost back to his old self on Airwaves but this has that same lovely breathyness but in Van Morrison’s body. I can’t quite hear the words and I prefer it – some Native Indian sounding post chorus chant reminds me a little of a direction Willy DeVille may have headed for but the melodic part of the song, the part that doesn’t sound so much like LaMontagne is certainly the most appealing factor.

She’s The One is great, it’s a bit baggy meets Buffalo Springfield hanging out with Black Crowes playing a Jack White guitar line at Springsteen’s birthday party with John Martyn – very strange but somehow interesting coming from him.

Pick Up A Gun sounds like Big Brother & The Holding Company transported to the future having lost their drummer during the journey and discovering a drum machine at Gene Pitney’s house left there by The Moody Blues. Again less emphasis on his voice and more on the music. This track also sounds like Love, Arthur Lee risen form the dead to co-write the song.

Julia has a standard three chord Garage band pattern. It’s like Inspiral Carpets with Clint Boon left off the track, The Monkees if they’d been left to their own devices. Total late sixties vibe, sound and harmonies.

No other way, is a little closer to modern day Ray but Clint got his organ back and the singing is so muted in comparison with previous albums that I can only imagine that people who loved his middle of the road style will like this less and those who would like this from another artist won’t like it from him. Despite its blatant sixties nod, I like it, it’s almost as good as Jonathan Wilson’s homage to the era.

But then wait for it – what just happened? The single Supernova has the sugariest synth line, chorus melody and lyric you’ve ever heard – I Want You To Be My Girl. It makes The Monkees’ singing  Cuddly Toy sound like Black Sabbath. Farfisa Sunshine Pop mixed with eighties DX7 synth line and clumsy drum programming – he HAS to be trying to have a hit with this track – I can’t bear it. It’s not that I’m allergic to happy music and this is VERY happy it’s just so, so, so – insipid.

Ojai is a little like a Chris Isaak song, pedal steel and acoustic guitars and Smashing as I have already mentioned is Pink Floyd 1967, what’s odd is the song order that puts this breezy country flavoured quintessential American song (that somehow also has a touch of soul in it ) right next to a quintessentially English sixties pyschedelic song – maybe that’s why he did it. Syd Barrett and Gram Parsons are in heaven right now discussing this.

The album ends with Drive In Movies and this makes me think that Ray LaMontagne is ageing in revrse. Trouble his first album is the mature middle of the road album and this sounds like a naive debut. Consequently Supernova has more vibe and more inspiration for me than his other easy records.

What I like about this album is his softer singing, his total direction change and less emphasis on over sentimental lyrics. On the negative side, it’s ridiculously sixties and the single is so lightweight that it’s is forcing me not to post it as a companion to this album post. I want to post something better by him if it’s going to be in a post specific to one song. If you must watch the video for Supernova (it should be called Superlightweight Supernova) you can watch it here because I guess Ray and certainly the record label would want that, it’s what they are pushing though lord knows why, with Nick Cave winning Ivor Novello’s, this tactic of bunny rabbit pop singles only alienates old fans and doesn’t collect new ones – men with beards singing songs like this are just scary! After reading the Coldplay, Ghost Stories review on The Quietus site: http://thequietus.com/articles/15274-coldplay-ghost-stories-review , I can only pray that for Ray’s sake that the Supernova video doesn’t find itself in this person’s inbox.