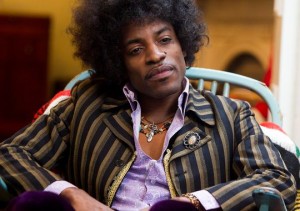 The much anticipated Jimi Hendrix biopic starring Outkast’s Andre 3000 as Jimi will be released on August 8th in England and September 26th in the US. Andre 3000 (real name Andre Benjamin) will make his movie debut with the film but he has appeared in TV series’ such as The Shield. The screenplay is written by Academy Award winning director John Ridley (12 Years A Slave).

The movie takes us from The Cheetah Club in New York in 1966 and then to London 1967 and finally to success at Monterey in the same year. The film has no original Hendrix songs as his estate refused permission to use original compositions either recorded or composed by Hendrix. One wonders why they said no and I imagine it must be truly frustrating for the makers of the film as it will be for us the viewers. A trailer for the film is linked below.