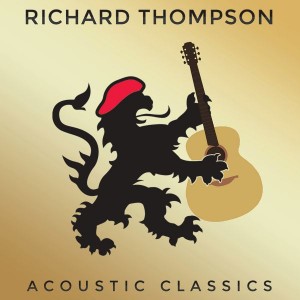 Richard Thompson finally makes the acoustic album he’s been meaning to make for years. He reaches back to his most famous classics (hence the title) giving us re-recorded versions of Wall Of Death, Shoot Out The Lights, Walking On A Wire  and I Want To See The Bright Lights Tonight. He moves forward through his career with Dimming Of The Day, Persuasion (written with Tim Finn released on the Before & After album) When The  Spell Is Broken, Valerie, I Misunderstood, and live favourite 1952 Vincent Black Lightning uncovering classic after classic up to Beeswing from 1994. Although the songs are recorded with just him and an acoustic guitar, his fluent technique and mastery of the instrument has you believing that there’s more than one of him! If you’ve ever seen him live acoustic you’ll see that there is only one man playing but the sound that comes out is at least two, possibly more – perhaps behind the curtain?

Although we’ve heard these songs before we never grow tired of them, they are timeless classics of the human condition. His songs are inhabited with tragic characters that come to life in his vivid vignettes – songs of love and loss, pain and misfortune but also hope and the poetry in ordinary lives. He transcends folk but sits firmly at tradition’s door. His resonant voice communicates his poignant stories so perfectly that you can see the personalities of these characters clearly in your imagination. The expressions on their faces, their jaw lines and deep dark eyes, the clothes they are wearing – through him, for a fleeting moment you can live their lives. A wonderfully stimulating master storyteller’s album with inspired guitar work that should have you rushing to the record store in order to return calmly with your prize for an undisturbed evening of quiet inspiration.