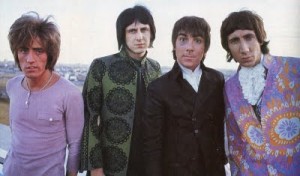 When it came to ownership of the singles in our house in 1967, the lines were a little blurred. The Who’s I Can See For Miles probably belonged to my brother – in the end it didn’t really matter as we both got to play all the singles we had on our new Garrard deck, although I do remember my brother’s initials appearing on some of the singles that were definitely mine and somehow I managed to inherit his copy of the My Generation album from 1965 on the original Brunswick label, probably worth a bob or two now. ( I still have it in the archive).

I Can See For Miles is such a powerful and simultaneously melodic track with Keith Moon’s manic drumming and with Pete Townshend thrashing at his guitar –  John Entwistle’s booming bass and somehow through this glorious mayhem, there is rather a sweet vocal from Roger Daltrey. It’s hard to imagine how they managed to make something so noisy sound so soft.

The song reached N0.10 in the US and N0. 9 in the UK and was the only single from the band’s groundbreaking album, The Who Sell Out (1967). The album included fake adverts between the songs for Radio London, Rotosound guitar strings and others as well as Heinz baked beans and Odorono deodorant on the cover, an original idea at the time. Produced by the band’s infuential manager/visionary Kit Lambert, the band have acknowledged the great impact he had on their lives and how he encouraged Townshend to write more complex music, resulting in Tommy. Lambert died in 1981 at the age of 45 falling down the stairs at his mother’s house. Lambert also founded the Track records label and was responsible for Arthur Brown’s hit Fire as well as signing Labelle, Golden Earring and Jimi Hendrix. A film about Lambert’s tumultuous life is allegedly in production and will hopefully appear in the near future.

These wonderful clips show The Who at two distinct periods in their history – first in the USA in 1967 on The Smothers Brother’s Comedy show miming but at their dynamic peak, and later in 1969 at The BBC in England where they had begun the transition from sixties Mods into seventies Gods.

I Can See For Miles/My Generation – The Smothers Brother’s Comedy Show 1967.

Tags: Kit Lambert, The Smothers Brothers, The Who