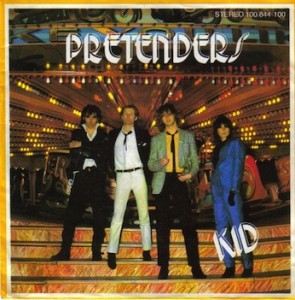 Although the first Pretenders single had been a cover of a Ray Davies song, the second showcased singer Chrissie Hynde as a talented songwriter in her own right. At the time of release I was living in London, or should I say fighting to live in London, playing guitar and singing with the True 100’s. The band consisted of me, Dare Mason on rhythm guitar and vocals, Del on bass and Justin Webster on drums. We made a three track demo produced by Pete Hinton (aka Biggles who produced early Saxon albums). Biggles worked  for Carrere records in London where I ended up getting signed in my next band. The songs on the demo were Judy Ludo, I’m Not Your Doctor and Cliches. I think I wrote and sang Judy Ludo, Dare wrote and sang Cliches and both of us wrote I’m Not Your Doctor and Dare sang it. Dare and I went on to make the three Noctorum albums together and we worked together on most of my solo solo albums and sessions over the years. I might add that during this period I also worked at Walls Ice Cream and played guitar and sang regularly at a wine bar in Twickenham

In 1979 I had embraced Punk and New Wave and at the age of 21 and living in London it was all happening. Nick Lowe, Squeeze, The Police, The Ruts, Joy Division, Ultravox, The Motors, Eddie And The Hot Rods, Tom Robinson, Siouxsie, Sex Pistols, Elvis Costello, The Skids, Generation X, The Cure, The Only Ones, the list of new bands went on and on. Happily I never deserted my musical past and easily went from listening to Be Bop Deluxe to The Boomtown Rats, Steve Hillage to The Undertones, Simple Minds to Genesis, Blondie to Gentle Giant – you get the picture! So when Dire Straits’ first album came out I had it in my collection before anyone knew who they were. It wasn’t long before they exploded and I bought their second and my favourite album of theirs Communique – not so long after I was supporting them on their Australian tour.

Meanwhile back in London, my favourite song of 1979 was Kid by The Pretenders. It was a perfect pop song because it was both catchy and deep with the most gorgeous vocal delivery  and fronted by an American girl with an unlikely band from Hereford. This band was special and James Honeyman-Scott’s perfect twangy guitar, Pete Farndon’s busy bass and Martin Chambers’ shuffling drums added up to a perfect chemistry that would spill over onto the band’s first album. I didn’t just like Kid, I loved it, still do. I love the melody and Chrissie Hynde’s singing has me melting into the furniture every time. It’s an all-time Rock and Roll classic single and it reached No.33 in the British charts. Who could possibly have known what the future would hold for this exciting new band that had somehow connected Hereford, a town associated with farming and fields in middle England, with Akron, Ohio, a town associated with tyres and industry in middle America.

Here’s a quick totally unthought out random Spotify Playlist of some of the more popular songs from that era of new music that coincidentally contains 21 songs: