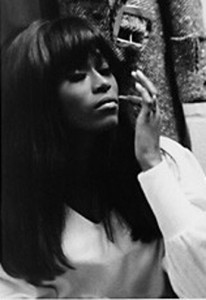 After a late night in the studio I wondered what I could post quickly that would simply speak for itself, but of course everything has a story!

Lady Grinning Soul appeared on Bowie’s Aladdin Sane album released in 1973 and featured Mike Garson on piano as well as the regular Spiders, Mick Ronson on guitar, Trevor Bolder on bass and Woody Woodmansey on drums. Of course Newley is present in Bowie’s theatrical vibrato but it’s Garson’s striking out of this world piano playing that enthralls.

The song is inspired by one of Leon Russell’s Shelter people vocalists, Claudia Lennear (Lennear also allegedly inspired Brown Sugar). Although she sang with Tina Turner, Joe Cocker, Delaney And Bonnie, Humble Pie and George Harrison on Concert For Bangla Desh she only ever made one album of her own, Phew! released in the same year as Lady Grinning Soul. Lennear appears in the 2013 documentary 20 Feet From Stardom  about those that were there performing with the biggest stars but never became stars in their own right despite their talents.

This is a wonderful song that closes Aladdin Sane and might be somewhat overlooked as one of Bowie’s masterpieces.