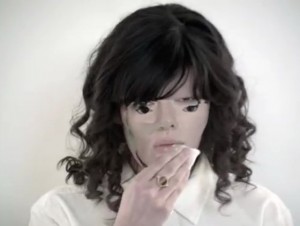 A simple, disturbing arty video from Natalie Prass. Why Don’t You Believe In Me comes from her self titled album released on Spacebomb records 2015.

The video concept was created by my best friend since age 15 and multidisciplinary artist, Erica Prince, who co-directed the video with Tiona McClodden. Erica and I have watched each other evolve as artists throughout the years, so it is really special to make something together at this point in our careers, the same way we’ve been collaborating since we were kids.

Erica’s sculpture is also featured in the video. The piece is called Self Possession and it is really about self acceptance. It implies a female protagonist that is forced to face themselves. In Buddhism the circle represents wholeness, of oneself and the universe, and so the physical side of the sculpture creates half of the circle, and the reflection completes it, as if to say that half of ourselves lies in our self-image, the one that we create.