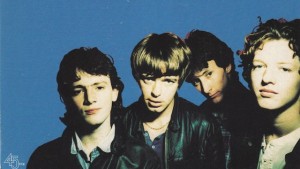 Although The La’s are associated more as an influence on Brit Pop and had little in common with the early eighties Liverpool scene it’s hard to talk about Liverpool in that decade without featuring their timeless classic, There She Goes released in 1988. The single only reached No.59 on the charts as the band attempted to record their debut album dismissing an impressive list of producers on the way- including John Porter, John Leckie and Mike Hedges before settling on Steve Lillywhite – and failing to get the result they wanted.

Wikipedia tells a tale of lead singer and songwriter Lee Mavers saying he “hated” the album and referred to it as “a snake with a broken back”.  The album finally being pieced together with guide vocals and bits and pieces from a changing line-up (only Mavers and bassist John Powers lasted through the sessions). Despite this the reviews were good and the album reached No.30 in the British charts. Later a Steve Lillywhite remix version of the single reached No.13 on the charts in 1990.

Although there are lots of La’s compilations available with rejected tracks, BBC sessions and B-sides, in twenty five years after the release of their debut, the band have only ever officially released one album. After leaving The La’s in 1991 John Powers went on to find success with Cast. Lee Mavers is still trying to find the elusive sound he hears in his head, frustrating everyone around him whilst having the courage of his convictions. Whether he will ever make another album remains to be seen.