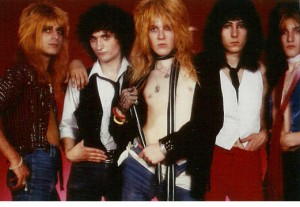 The glam Japan, and although singer David Sylvian (real name David Batt) carefully moulded his image and his voice to suits his aspirations, the Rock And Roll extravaganza he created with his Catford school friends had New York Dolls, Roxy Music and Bowie fans digging in their closets again for their Mum’s discarded old blouses and frantically rattling the bathroom cabinet in search of pancake.

The band initially consisted of Sylvian on vocals and guitar, Mick Karn (real name Andonis Michaelides) on bass, Steve Jansen (Real name Steve Batt, Sylvian’s brother) on drums and Richard Barbieri on keyboards – later joined by Rob Dean on guitar. Somehow they went from West Catford to West Berlin and signed to funky Euro Disco label, Hansa whose biggest act was Boney M. They made an album that mixed Glam Rock (and you guessed it), funky Euro Disco. They called the album Adolescent Sex and immediately had to change the title in some countries because it was too controversial, releasing the album with different cover art, simply titled Japan. It didn’t bother the Dutch and the title track ‘penetrated’ the Dutch Top 30 and because of their image and name, their love affair with Japan (the country) began. Nobody else cared, the album failed to chart in the UK.

But listen to the song? It’s called Communist China for God’s sake! It’s hardly throwaway! It has the strangest chorus and features Sylvian’s brilliant growl and a violent lyric that contradicts their pretty image. It’s flick knives and lipstick, the juxtaposition of jewellery and Jack the lad dressed in their sisters wardrobe and attracting swarms of girls to the confusion of parents and the less adventurous followers of fashion.

Their second album, Obscure Alternatives released in 1978 followed the same pattern as the first but as time went on they slowly began to change until eventually they became some kind of oriental electronic band with Sylvian’s voice evolving from rock sneer to an arty wavering. Quiet Life was released in 1979 and  Gentlemen Take Polaroids appeared in 1980 and by now Rob Dean’s role in the band was becoming less and less necessary. The band left Hansa and Dean went too. They signed to Virgin and made their last and most successful studio album, Tin Drum in 1981 reaching No.12 in the UK Charts – they split up in 1982.

They got together in 1991 under a different name (Rain Tree Crow) for one album and immediately split up again. All the members have continued to make lots of different projects, working together as well as with other bands, Jansen working with previous members of the band as well as Yellow Magic Orchestra’s Yukihiro Takahashi and Italian singer Alice. Barbieri joined Porcupine Tree, Dean played with Gary Numan and Sinead O’Connor, Mick Karn played with Kate Bush, formed a band with Peter Murphy from Bauhaus and became an in demand session player, sadly he died of cancer in 2011. Sylvian went on to make an impressive collection of arty solo albums as well as records with CAN’s Holger Czukay, King Crimson’s Robert Fripp and Yellow Magic Orchestra’s Ryuchi Sakamoto.

This interesting tidbit about Rob Dean from Wikipedia:

“Dean’s principal activity now is as a professional ornithology writer and artist on the birds of Central America. He lives in Monteverde, Costa Rica, and, now known as Robert Dean, has established a reputation as an expert on the region’s birdlife. In 2007 Dean collaborated as illustrator on a bird study book (along with Richard Garrigues), entitled The Birds Of Costa Rica: A Field Guide. He has been reported as occasionally playing guitar with local bands including Monteverde’s rock band Chanchos de Monte, fronted by Alan Masters.”

But it all started here running around the stage with bleached hair, lipstick and mascara, fighting for the backstage mirror.

Your skin a white stained sensation
Clinical bodies won’t do
And as we’re pumping, pumping and resisting
Inserting love into you

Communist China, Communist China
Take me to heaven
Somebody wrong
We’ll throw glass
In your face
Call it new propaganda
We’ve been waiting for