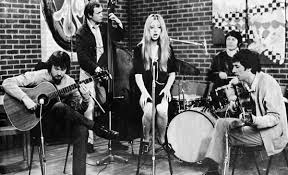 Any fan of British folk music became aware of John Renbourn and Bert Jansch (3rd November 1943 – 5th October 2011) in the Sixties as the guitarists from Pentangle. The band existed between 1967 – 1973 with Jacqui McShee on vocals, Danny Thompson on bass and Terry Cox On Drums. Their blend of Folk, Jazz and Blues made them unique, influenced by Davey Graham, they became virtuosos on the acoustic guitar and between them they influenced a generation of major guitar players such as Led Zeppelin’s Jimmy Page, Johnny Marr and many more.

After Pentangle both guitarists went on to make many interesting solo albums. I have all of Pentangle’s records and at least 20 John Renbourn solo albums in the archive. One thing that always amazed me about John Renbourn – there’s no fret slide? Guitarists will know what I mean by that, but how did he do it?

Terribly sad to hear that he has died of a heart attack aged 70. RIP John, condolences to friends and family.

This is his obituary from The Guardian newspaper in the UK: