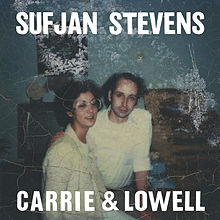 Someone has finally realised that since You Tube you can advertise your album with random images for no money instead of making a dumb mini-movie with uncomfortable musicans praying to have the camera taken off them. After all, the kind of people that might be into Sufjan Stevens music might be more interested in the music than his lack of acting skills or a video director’s attempt to create a grandiose video that no one wants from an artist that fans prefer musically rather than visually.

The amount of money that has been spent on videos that didn’t help at all might have been better spent on a cow grazing in a field for 3 minutes and the video budget gone to the musicians to help them survive and not have to worry about being able to afford to stay creative. So here’s a cheap trailer from label, Asthmatic Kitty and some great new songs off Sufjan Stevens latest album Carrie & Lowell with irrelevant video pictures unofficially posted by a fan I presume.

Stevens sounds like a cross between Elliot Smith and Eric Matthews (that breathy voice) and the kind of melodies he sings remind me of Paul Simon’s Sixties songs. Carrie and Lowell refers to his mother and step father and it seems to be a deeply personal album on first listen. But the songs are calmly infectious and I imagine this unfussy rich, melodic album will be a favourite for old and new fans alike. An absolute must for your 2015 vinyl album collection.