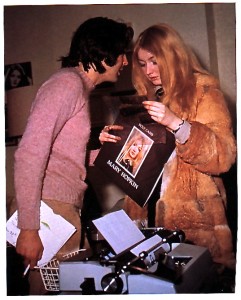 Mary Hopkin’s Paul McCartney produced debut single, Those Were The Days reached No.1 in the UK in 1968. The follow up Goodbye, this time written by McCartney reached No.2 in 1969. Hopkin a Welsh singer with a crystal clear voice came to the attention of McCartney after she won Opportunity Knocks a talent show on British television in the sixties. (I remember her winning). She released another single Temma Harbour in 1970 that reached No.6. and then Knock Knock Who’s There another No.2 single after coming second to Irish singer Dana’s All Kinds Of Everything in the Eurovison song contest.

An album, Postcard was released in 1970 rising to No.3 in the UK charts but for some unknown reason her next single Que Sera, Sera (Whatever Will Be, Will Be) didn’t chart. In the same year Think About Your Children reached No.19. In 1971, Let My Name Be Sorrow only reached No.46. The follow up album to Postcard, Earth Song/Ocean Song failed to chart. Water, Paper and Clay released in 1972 didn’t chart either. (Perhaps the Eurovison Song contest was something to do with it).

She retired from music in 1971 to have a family, married producer Tony Visconti and then returned in various roles as, actor and guest singer, (she sang on Bowie’s Low as Mary Visconti) as well as joining Peter Skellern’s Oasis and in recent years making some beautiful folky records that are totally off the radar especially the 2013 album Painting By Numbers.

Mary Hopkin is unfortunately either ignored or forgotten but she continues to make inspiring records, her beautiful voice still intact all these years later.