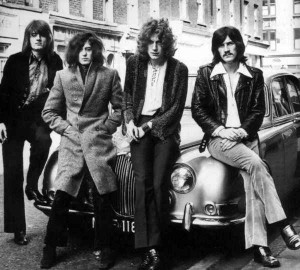 Although this is a Radio Session, someone filmed it. Whether it went out on TV too, I’m not sure but it certainly preserves a special moment in time for this exciting new band from England on tour to support their self-titled debut album. 1969 was a busy year for Led Zeppelin releasing two albums, touring all the time (with Cartoone in support on one of their US tours) and in the studio recording all over the world, collecting ideas from live jams, hotel rooms and working on them when they could until they had put together enough material for Led Zeppelin II released in October that year.

But this day in Denmark tells the tale of Led Zeppelin 1 as they play four tracks from their debut. Maybe less than a hundred kids cross-legged on the floor unaware that they were experiencing a private viewing of what would become the biggest band in the world in the near future. At this point both Robert Plant and John Bonham were 21, John Paul Jones 23 and Jimmy page 25, just kids themselves from where I sit today.

At this point Page and Jones were already old session hands branching out and their musical confidence is riding high. Still, Page doesn’t always nail it live, but he’s got so many ideas and you can hear him jumping out of rhythm parts into lead parts throughout the performance relying on John Paul Jones and John Bonham to cover him whilst he investigates riffs and solos, moody tones and cacophony. Bonham might be connected to his rhythm partner in Jones but there was also an understanding between Bonham and Page that makes you realise why that when Bonham died the band was over. And then there’s Plant standing there a little awkward, fresh out of the Midlands with that expressive voice, hitting the high notes with ease and turning Baby, Baby, Baby into sonic poetry

After the session years, Page joined The Yardbirds on bass until Jeff Beck abruptly left and Page took over on guitar. The fact that Eric Clapton had also been in The Yardbirds, makes you wonder if Page being the only guitarist in Led Zeppelin was something to do with competing with his contemporaries – Clapton didn’t need another guitarist in Cream and Beck was making a name for himself as a solo guitar player for hire. Page didn’t want another guitarist to play off, to support him during solos, to make it easier for him so he didn’t have to cover both lead and rhythm parts, melody and chords – Led Zeppelin were a three piece with one of the great Rock rhythm sections and he figured that was all he needed.

Led Zeppelin infamously commandeered song parts and ideas that weren’t their own without crediting the writers. In those days few musicians were getting paid properly, many agents and managers, promoters and record companies relied on the fact that the girls and the stardom would be enough. The band’s legendary manager Peter Grant eagerly defended their interests, his boys were not going to get ripped off. I wonder how much thought went into the hijacking of other people’s ideas, especially of Jake Holmes on Led Zep 1 (Dazed And Confused) and Howlin’ Wolf on Led Zep II  (The Lemon Song). The Blues is a hard argument with musical themes following the same patterns and progressions, until of course it becomes blatant and it’s difficult to understand why Zeppelin were unforthcoming with deserved credit when they were literally rolling in cash. Page paid for the recording and mixing session for Led Zeppelin 1 out of his own pocket, his session fees cashing him up even before Led Zeppelin made him a multi-millionaire

But their performance here is fuelled with energy and magic (possibly pre Aleister Crowley) and interestingly with Jimmy Page playing a Telecaster, pre his trademark Les Paul (and for drum nerds, Bonham probably playing a Premier kit pre his trademark Ludwig). There’s something irreverent in the use of violin bow (although Eddie Phillips from The Creation did it first) and that mixture of arrogance and humility is apparent – they knew that they were good but not sure yet just how good.

It’s not hard to imagine that the first album was recorded and mixed in nine days with Led Zeppelin II mixed in two days after being pieced together from all the recording sessions in different studios throughout the year. With Page and Jones’ experience and Bonham’s incredible talent, all Plant had to do in the studio was what came naturally to him and the chemistry was complete, they may have gone on forever, only the tragic death of John Bonham aged 32 in 1980 could stop them.