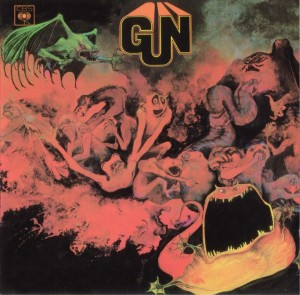 It would be churlish to mention the name Gurvitz without posting this fab sixties clip of The Gun playing their 1968 UK Top Ten, Race With The Devil. Jon Anderson from Yes had briefly been a member but at this point the band had become a trio with Adrian Gurvitz on guitar and vocals, Paul Gurvitz on bass and Louie Farrell on drums.

The album cover was Roger Dean’s first trip into album artwork – note the band is called Gun on the cover but on the single they were, The Gun – that’s a question for the Gurvitz brothers next time you see them.

They released a second album, Gunsight in 1969 but soon broke up with Adrian and Paul following separate directions until they came together again in the seventies with Three Man Army, releasing three albums between 1971 and 1974 and then Baker Gurvitz Army releasing three more between 1974 and 1976.

Race With The Devil, written and sung by Adrian Gurvitz features an infectious Boogie rhythm and a riff that impressed Hendrix enough for him to include it towards the end of Machine Gun at the Isle Of White festival in 1970 (18.12). The song has been covered by Black Oak Arkansas, Girlschool and Judas Priest (because as we know Judas Priest worship the devil and encourage young people to commit suicide). The best cover is by Girlschool, RIP Kelly Johnson who died of cancer aged 49 in 2007. Johnson simply had the best feel for this classic Rock riff and interestingly used no effects or pedals.

A last note on Roger Dean, I mentioned that I had met him at an exhibition of some of his works in Sydney and he offered to do an album cover although it seemed inappropriate after seeing Matthew Sweet’s 1997 album Blue Sky On Mars, where Dean designed the text – to me it looked wrong outside the Progressive Rock genre. He told me one very interesting thing – he said that album covers wasn’t really his thing he was more of a designer, furniture for example. It’s hard to imagine, but it seems that the album covers for him were a side project.

Last but not least, one must laugh along with Adrian Gurvitz as he finds himself miming the ‘insane’ laughter and casting a wry smile towards the camera (on what seems to be a French TV show).