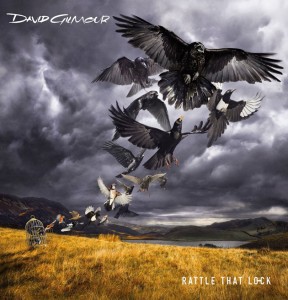 September 18th seems to be a popular date to release a new album in mega-star land as Dave Gilmour releases a new track from his forthcoming, first album in 10 years, Rattle That Lock. The first single might be a little too aware of the need to succeed, too in need to tick all the boxes, catchy beat, easy melody, guitar solo, it’s frustratingly not as good as the artist that made it. It’s what’s wrong with Eric Clapton, too smooth and for such an amazing guitarist underwhelming in the solo department. I love Gilmour, I love his voice and his guitar playing, I love his first self-titled solo album more than half of his second, About Face and most of his last one, On An Island (apart from that middle of the road saxophone). But it’s a thin line with his traditional Blues licks, it’s only inspiration that separates him from the ordinary and he’s following that pattern of releasing the accessible track (like Blue Light, the lead track off About Face that I didn’t like so much either) – one can only hope that the easy, thoughtful, breathy, slow-paced Gilmour inhabits the new record and allows us to drift away with him – I don’t want to go running with him and celebrate his finger on the pulse of music, I don’t want to congratulate him on his high chart position, I want a new inspired version of the old tricks.

Here’s the problem – big artists need to appeal to a large audience – why? Rich, famous, artistically succesful, loved – so screw what you think the world wants! That’s why Paul McCartney is rather fascinating – The Fireman project for example is him creating for its own sake with no concern for the audience reaction. Do artists become addicted to success, plaudits, being known by the man in the street, the milkman humming their tune (Ha Ha milkmen). Why can’t massively successful creative artists make more interesting music and release it for those discerning fans that are there for the more thoughtful stuff. Bowie nearly did it on his last album The Next Day and it’s why Low was so amazing

A few years back I went to see Fleetwood Mac, Megadome San Diego – it’s a story in itself but what struck me apart from an array of terrible brown and light blue T-Shirts, was the concentration on commerce and not creativity – shirts and the greatest hits song list. Where’s the creativity that made them so loved? Surely Stevie Nicks could have given us a tour exclusive EP, Lindsey Buckingham, some smart guitar instrumentals and McVie and Fleetwood a selection of mature rhythm based mesmeric pieces to showcase there partnership, their feel, their magic. But no, not possible. All the money in the world, superstars but not a shred of an idea concerning what put them there.

I surely hope that Gilmour’s album is not under pressure to perform in the ‘marketplace’ because that will lead to disappointment for everyone. Ignore what the press said about the last Pink Floyd album because they are just as bad, reviewing the band, the legacy, the history, the success instead of the warmth, the low key honouring of Rick Wright, the sentimentality – the dirtiest word in music. Between the press expectations and the pressure on Pink Floyd to justify their status the potential has been ruined. Without their past, the same people would make amazing music. Obviously the Waters conflict and the death of Rick Wright have been factors in ending the band, but if they were all friends alive and in their sixties it’s still doubtful (like the Stones) that they could make a recently written, new amazing album – and that’s tragic.

Go here for an interesting article about the video.

This from You Tube:

“Now available to view above is the animated video for Rattle That Lock, created by Alasdair and Jock from Trunk Animation, the London-based production house, under the creative directorship of Aubrey Powell of Hipgnosis. The hand-drawn animation depicts various facets from John Milton’s Paradise Lost, from which Rattle That Lock lyricist Polly Samson drew her inspiration. The poem itself encompasses twelve books, concerning the Biblical story of the Fall of Man: the temptation of Adam and Eve by the fallen angel Satan and their expulsion from the Garden of Eden. Trunk directors Alasdair Brotherston and Jock Mooney, alongside producer Richard Barnett, assembled a team of 12 animators, artists and compositors, who worked continuously over three months to bring the narrative and many technical elements together. The team developed the narrative and took its main inspiration from the first three books of Paradise Lost, but also drew on details from across all twelve volumes. The film follows the fall of Satan from the kingdom of Heaven and his subsequent journey through Pandemonium, Purgatory and Chaos on his way to corrupt the virgin Earth”.

5 A.M.”
Rattle That Lock
Faces of Stones
A Boat Lies Waiting
Dancing Right in Front of Me
In Any Tongue
Beauty
The Girl in the Yellow Dress
Today
And Then …