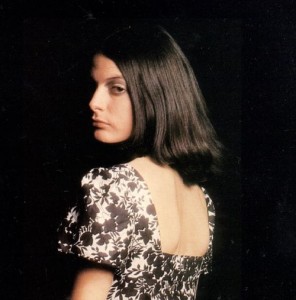 June Tabor as recording artist came to the wider attention of British Folk fans in 1976 with two albums in that year. The first, Silly Sisters was a collaboration with Steeleye Span singer Maddy Prior, the second, her first solo album, Airs And Graces. Previously appearing as a guest on other people’s records, it took a while for her to come into her own, originally inspired to sing after hearing Folk legend Anne Briggs’, Hazards Of Love EP, she states “I went and locked myself in the bathroom for a fortnight and drove my mother mad. I learned the songs on that EP note for note, twiddle for twiddle. That’s how I started singing. If I hadn’t heard her I’d have probably done something entirely different.”

The first track here, While Gamekeepers Lie Sleeping is from that first solo album and the second, False False is from Against The Stream released in 1994 (most of her album titles begin with the letter A). Both of these songs are traditional but Elvis Costello has written especially for her and she has recorded songs by Richard Thompson and Billy Bragg amongst many, many others as she is seen as a great interpreter with her rather dark expressive voice.

If you haven’t come across June Tabor before, prepare to spend all your money on her records as once you have one it’s hard to not buy another, seduced by her captivating vocal performance as she lives the lyric in every song she sings.