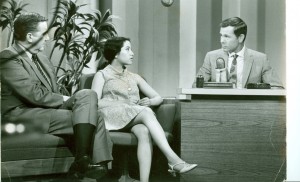 Society’s Child is the song that started it all for Janis Ian and here she is performing it on the Smothers brothers TV show in 1967 when she was just 16. The song reached No.14 in the US charts but was controversially banned by some radio stations due to its controversial subject matter – teenage interracial relationships. Atlantic Records legend, producer, Jerry Wexler later publicly apologised for not releasing the song as they released her from her contract to be picked up instead by another producer legend, George Shadow Morton, releasing the record on Verve Forecast in 1967, a full two years after its intended release. The song was actually released three times before it became a hit, Leonard Bernstein featuring it on a CBS special that finally drew the attention of the public –  it went on to sell 600,000 copies.

In an interview with Ian she mentioned that people would spit at her or try to trip her up as she walked on stage, she recieved hate mail and death threats and a radio station in Atlanta that played her song was burned down in protest. At 16 she had to have a chaperone to appear on TV shows, meeting Bill Crosby backstage at the Smothers Brothers TV show, he allegedly tried to have her black listed as a lesbian and not suitable for family entertainment when he saw her resting her head on her chaperone’s lap.

Can you imagine what a girl of that age had to go through in that era as she tried to negotiate sexism and racism in the entertainment business. Janis Ian was 13 when she wrote this song, more tuned in, wiser and smarter than a lot of those around her, so young, she knew the difference between right and wrong. What a sad and fucked up world we live in, bigotry banning love, hypocrites censoring songs out of ignorance and still today, battles are being fought that shouldn’t even qualify as conflicts – in my humble opinion.

The picture here is Ian on the Johnny Carson show, he was apparently a big supporter of Ian and was helpful in her initial success.

Come to my door, baby,
Face is clean and shining black as night.
My mother went to answer you know
That you looked so fine.
Now I could understand your tears and your shame,
She called you “boy” instead of your name.
When she wouldn’t let you inside,
When she turned and said
“But honey, he’s not our kind.”
She says
I can’t see you any more, baby,
Can’t see you anymore.

Walk me down to school, baby,
Everybody’s acting deaf and blind.
Until they turn and say, “Why don’t you stick to your own kind.”
My teachers all laugh, the smirking stares,
Cutting deep down in our affairs.
Preachers of equality,
Think they believe it, then why won’t they just let us be?
They say I can’t see you anymore baby,
Can’t see you anymore.