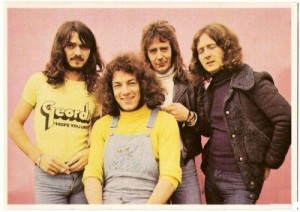 Well there’s nothing like a bit of local pride, coming from Newcastle and calling yourself Geordie, is like coming from Liverpool and calling yourself Scouser, Manchester, Manc, London, Cockney etc, etc – you get the picture. Geordie were formed in 1972 with Viv Malcolm on guitar, Tom Hill on bass, Brian Gibson on drums and Brian Johnson on vocals. Their first album Hope You Like It was released in 1973 and although they had four singles in the Top 40 in the same year, the album failed to chart. They were the opposite of Deep Purple, charting singles but the fans weren’t interested in the albums – they were a Glam Rock band in the vein of Slade or The Sweet or Hello. It was a singles thing:

Only two of these A sides were even on the Hope You Like It, it simply didn’t matter, the fans weren’t buying the album so you could release singles as songs were written – if you thought you had a chance of a hit, go in the studio record it, get it out. Unfortunately what happened in Geordie’s case was that none of their singles released in 1974 and onwards were hits, they didn’t even make the Top 100. The band made two more albums before it all started to fall apart, Don’t Be Fooled By The Name in 1974 and Save The World in 1976. Brian Johnson left after Save The World for a solo project and 1978’s No Good Woman consisted of some unreleased tracks with Brian Johnson and the rest with new singer Dave Ditchburn with various other musicians along with the original band. They released their final album in 1983 with another new singer Rob Turnbull.

I’ve added two versions of All Because Of You because in the second version Johnson is wearing a Newcastle United scarf and shirt just in case you weren’t sure where they were from. On the second album they recorded their own version of House Of The Rising Sun by local lads made good, The Animals.

In 1980 Brian Johnson joined AC/DC – you know the rest, except whilst on hiatus from AC/DC a reunion called Geordie 2 toured in 2001, it’s unclear who was actually in the band but one wonders if they wore the same amazing clothes that they wore in these classic seventies videos – probably not. One last thing, I just read that Back In Black sold 50,000,000 copies and is the second biggest selling album of all time, (I presume after a Michael Jackson album).”It’s a Long Way to the Top (If You Wanna Rock ‘n’ Roll)”.