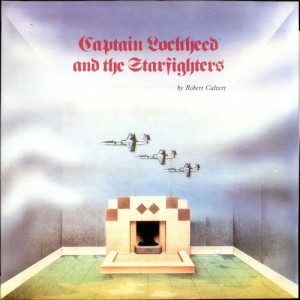 What I love about this album – apart from the songs, is the dialogue. A concept album by Hawkwind member Robert Calvert (Silver Machine, Seven By Seven and Sonic Attack were three of his greatest Hawkwind moments). The plot: Germany wants to modernize after World War 2 and are talked into purchasing one of the most accident prone and badly designed jets ever built. Nicknamed, ‘The Widowmaker’, the album takes you through the chronology of this disastrous machine.

Why this today, well Lemmy plays bass, other members of Hawkwind appear, Simon King, Del Dettmar, Nik Turner and Dave Brock, Pink Fairies members, Twink and Paul Rudolph, Arthur Brown, Eno and Adrian Wagner. It’s like a thunderbirds script based on true events. Some of the accents are hilarious, losing their German inclination and reverting back to English half way through a speech. Nuts, love it – puppet space rock where you can see the strings, scripted by a loon who knew the history of the Starfighter (Calvert’s childhood dream was to be a fighter pilot) and starring The Bonzo’s Viv Stanshall as one of the actors, also Traffic’s Jim Capaldi and two names I don’t know, Tom Mitteldorf and Richard Elen, all produced by Roy Thomas Baker. In 1973-75, Baker produced the first two Queen albums, Sheer Heart Attack, A Night At The Opera and Jazz, Hawkwind’s, Hall Of The Mountain Grill, Man’s, Rhinos, Winos And Lunatics and Be Bop Deluxe’s, Futurama, his technical skills making the difference with these arty records, developing them beyond musician’s eccentric dreams.

I can’t even begin to dissect the songs because I love them all as the 16 year old me that played this album to death, but The Right Stuff and the spoken, Interview is brilliant…sorry, it’s brilliant. The Song Of The Gremlin Pt.1 with its Anette Peacock synth voice and Pt.2 has Calvert impersonating Vincent Price as Edgar Allan Poe. You have to follow the story through the dialogue and the songs to appreciate it and I imagine it’s not for everyone, but I will have a soft spot in my heart for it forever. Sadly, the South African born Calvert didn’t make it past his 43rd birthday dying of a heart attack in 1988.

I will be having a look at some of my favourite Lemmy moments in the coming days. Having seen him play in Stockholm on December 4th, this news is shocking. It had been a while, the time before this was with Hawkwind in the early seventies at Liverpool Stadium. RIP Lemmy, the outpouring of love for you shows what a special person you were, now let’s celebrate your music.