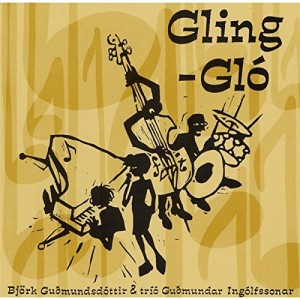 This album is an oddity, Björk singing jazzy standards in icelandic, I just wonder why she only ever made one album in this style because in my humble opinion it’s a big success. As a singer, Björk is unique but in the context of Jazz she sounds like an alien on the bus. Her petulant girl vocal delivery, expressed with simultaneous passion and complete control is truly a revelation. But like most sensational vocalist there’s a ceratin sameyness in their delivery as if they are always trying for the same perfect target and generally you don’t hear these talented singers stepping out of their controlled professional comfort zone even though Björk’s parameters are extremely wide. But what she doesn’t do is take on a different persona altogether as perhaps Sammy Davis Jr. Paul McCartney might – two exceptional vocalists, exceptions to the top vocalist rule that possess quite different voices in their repertoire.

Singing in Icelandic sounds particularly twisted to anyone south of Copenhagen and just whose idea this was is hard to ascertain with little information about the other musicians, it seems the drummer is a politician (only in Iceland). The problem with Björk in any context is that despite her magnficent voice she can be, a Swiss chocolate too much, one too many cherries or perhaps because she comes form the north, one jar too many of that special tasty pickled herring. But her skill is unquestionable, her relevance undeniable and her magic unstoppable. In her own music, her weirdness, her unusual approach, fits in easily with producers as mad or unorthodox as her but in the Jazz arena the tradition of standards highlights her as the loony in an evening dress in an unlikely collaboration.