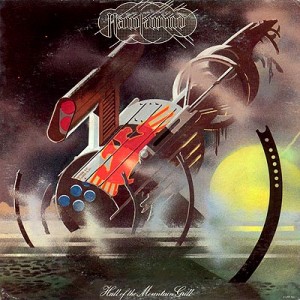 In 1974 Hawkwind released their most polished album to date, the Roy Thomas Baker and Doug Bennett produced Hall Of The Mountain Grill. This wasn’t going to please everyone as rough edges were smoothed out by a professional production, the electronics more subdued. (The following year Baker produced Queen’s A Night At The Opera, state of the art at the time). Hall Of The Mountain Grill felt like a rehearsed set recorded in the studio and that is actually what it was as the constant touring had the band playing these songs regularly before they recorded them, two songs – You’d Better Believe It and Paradox ended up on the album as live versions. The band had lost both Robert Calvert and Dik Mik for the recording – the poet and the electronics nut, this seriously affected the results, but they added violinist and keyboardist Simon House from High Tide and Third Ear Band – Del Dettmar remained for the album’s recording but was gone by its release.

Although it was less freaky than the albums of the past it opened with one of their most concise songs, Psychedelic Warlords (Disappear in Smoke). It sounded like they had moved out of a squat and got their own flats, written the album in an environment of security and had considered their sci-fi concepts as their most original trait and best future – the album sleeve a painting by designer of three of their previous covers, Barney Bubbles (Colin Fulcher) was of a derelict spaceship in an alien landscape. A side note, Fulcher tragically committed suicide in 1983 by gassing himself.

So their hippie, freaky, anarchist, Hells Angel side seemed on the wane as 1974 approached, somewhat surprisingly because in July 1973, two months after the release of Space Ritual, they released the Urban Guerilla single, Calvert singing. It reached No. 39 on the UK chart but it was immediately banned by the BBC with the IRA on a bombing campaign at the time. After three weeks the record company withdrew the single, the B-side was Brainbox Pollution and for a moment one might have imagined that Hawkwind were heading more towards future Mötorhead territory with some blistering Rock and Roll but by the following year they had returned to refined sci-fi concepts, one might say a more palatable Space Rock, almost like something the BBC would commission for a TV series. This album was pretty tame especially with Punk around the corner, the following year Patti Smith would release Horses and her kind of poetic anarchy made Hawkwind sound slightly dated, a sci-fi comic book more connected to a progressive scene than anarchic Ladbroke Grove revolutionaries.

Having said all that, I actually really like the record. it might not fit into everyone’s idea of what they should be but they still maintained an original sound, memorable songs, jamming and some kind of slightly anti-establishment message at least. Psychedelic Warlords (Disappear in Smoke) seemed to offer concern for the people, you got the feeling that they might come and save you and take you away in their spaceship. The second and title track the instrumental Hall Of The Mountain Grill is rather beautiful with a piece of music that might have fitted nicely as the theme to a French art movie – piano and surging synthesizers has you imagining black and white images of French beauties on beaches, the wind blowing in their hair, clad in black polo necks, staring out to see with regret.

Wind Of Change starts with thunder or an explosion, some kind of calamity and into dramatic hammond organ and more synthesizer pieces, perhaps Simon House as Third Ear Band member had strongly influenced the band in this direction. But when the bass comes in it’s like Pink Floyd, House’s violin theme introduces a piece that evokes imagery of a great procession across the expanse of a continent, building into guitar and coming to an end with the higher tones of the organ – that’s two instrumental pieces in a row out of three songs on the album.

But next it’s Lemmy – Lost Johnny a grinding upbeat underground Pop – it’s almost sixties in its beat, melody and simplicity as if Janis Joplin’s Big Brother And The Holding Company guitarist Sam Andrew is playing guitar. Odd, not like anything Hawkwind have done before. As soon as they hit the first chords of Nik Turner’s D-Rider it sounds more like the Hawkwind space drama you might expect but still Roy Thomas Baker has control, there’s no overriding feedback, it sounds contained. Phasing choruses and choirs of synthetic voices, dominate the drums, disappearing altogether in the verses returning for the choruses – it doesn’t actually warrant analysis, it’s how Hawkwind sound without trying, it’s easy for them to be like this – too easy perhaps.

Side Two opens with the first of the two live tracks, You’d Better Believe It, recorded at the Edmonton Sundown, it’s a bit like the early Psychedelic Furs when they were at their best or early Ultravox and you realize that Hawkwind were not going to be wiped out when the Punk revolution came, they actually fitted in, even with long songs and spacey electronic solos, sax, violin and guitar solos, long hair and flared trousers. On You Better Believe It you can hear the Doctors Of Madness and that’s when you realize that they should have been affiliated with Hawkwind rather than Punk Rock as they struggled to find an audience with their desolate, domestic paranoia and bleak dystopian urban landscape – they were Space Rock without knowing it.

Web Weaver again reminds me of Pink Floyd with its Rick Wright piano until it turns into an uncertain Pink Fairies demo disappearing as soon as it arrives. The other live track Paradox recorded at the same venue in London is back on track with Brock’s electric guitar chords and Lemmy’s by now unmistakable bass playing. But these songs don’t really blow your mind like Space Ritual, In Search Of Space or DOREMI did. They are just songs by a band you like and although there’s high points you wonder what they might do next, how will they balance their freaky beginnings, their randomness, their marauding of the universe, with their ideas and their experience annoyingly growing as they complete their fourth studio album.

The album finishes with gamelan sounds and another very short instrumental track, Goat Willow, it sounds like an afterthought and one wonders if they were truly lost for this album. Not because it’s bad but because they had to reassess. Calvert had imprinted his eccentric poets soul on the band on previous releases, Dik Mik had been the non-musician, the Eno type character that added noise not music to the songs and with them both gone they resorted to being like Pink Fairies, a bunch of musicians from Ladbroke Grove that had a band and had better make an album so that they could continue the pattern of album, tour, album.

To conclude, I can analyse this record into the corner and then close my eyes, let it escape and thoroughly enjoy it – you should do the same.