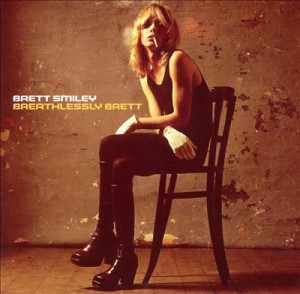 Discovered by Stones manager and producer, creator of Immediate records, Andrew Loog Oldham, it was the Glam era and Smiley’s catchy tunes,  good looks and Bowie-esque demeanor had Loog Oldham convinced that the kid was heading for stardom. Having read all the recent contradictory personal accounts of the facts involving Brett Smiley’s short rise and fall, I can only tell you that there is a book by Nina Antonia, The Prettiest Star: Whatever happened to Brett Smiley – I would imagine that this is the best place to read his story.

The book was released in 2005 and followed soon after RPM records had reissued Breathlessly Brett, Smiley’s debut album recorded around 1974 and shelved after the catchy single Va Va Voom/Space Ace failed to set the charts alight – unbelievable considering a female Marc Bolan meeting Noosha Fox at a Chinn and Chapman pyjama party would surely guarantee success. But the label, Anchor Records got cold feet after lots of money was invested and not seeing enough return for their investment, they pulled the plug.  It wasn’t to be and the album floundered in Anchor Records/MCA tape store for thirty years. Twenty two years later it’s still impossible to find the reissued CD and if you ever stumble across the original single, make sure you keep it with your collection of hen’s teeth.

A friend of mine (DB), whose opinion I trust, knew him and said he was a nice sweet man and that soft side of him is apparent when you hear his music – breathy teenage glam sung by a lad who must have wondered what hit him. Ultimately it all went wrong but he could have easily found himself riding the great pink stallion through the sparkly clouds dressed in his Mum’s back to front blouse. My advice is to ignore the uncomfortable footage here from the Russell Harty show and listen to the album a few times wearing silver platforms and staring into the eyes of a lipstick heavy mannekin sporting a bag of stolen mascara. At this point you can wonder at his cover of Neil Sedaka’s Solitaire and how he managed to make it sound like the impossible coming together of Lynsey de Paul and George Harrison.

Amongst his own snappy Glam tunes he also covered I Want To Hold Your Hand, something no-one can do, and The Four tops 1965 hit I Can’t Help Myself into Over The Rainbow? Ending the album with the evergreen Young at Heart. His own sprightly songs were loveable gems of the genre. Highty Tighty and the classic Space Ace that didn’t exactly scare Bolan and Bowie as songwriters or even distract them from contemplating their wardrobes but they must have known he was around.

Inevitably Brett Smiley found himself the victim of over indulgence in the wrong drugs with the wrong people and never recovered from his brush with fame, if that was his goal, he appeared here and there in New York, fronting bands and was by all accounts a cool guy to know and be around. Steve Marriott played guitar on his album, his death must have been a terrible shock and then the death of Marc Bolan must have given him great sadness at the loss one of his heroes. To save him from a shock that he may not ever of recovered from, Brett Smiley died in New York on the 7th January, just a couple of days before David Bowie. RIP Brett Smiley. Condolences to friends and family.