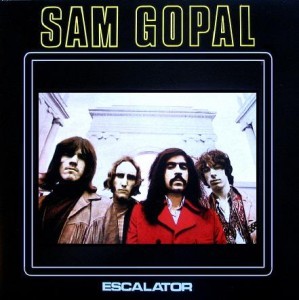 Sam Gopal originally Sam Gopal’s Dream were named after their Malaysian born tabla player and were part of the London Psychedelic scene from 1966 to 1969. The band had Mick Hutchinson on guitar and Andy Clark on keyboards, later of Clark Hutchinson and not to be confused with the Andy Clark from Be Bop Deluxe. If you haven’t heard Free To Be Stoned (1970) by Clark Hutchinson … well maybe another day. Pete Sears played bass and keyboards, Sears played with many different bands but most famously with Rod Stewart on Gasoline Alley and Every Picture Tells A Story, Never A Dull Moment and Smiler as well as the hits Maggie May and Reason To Believe – and a list too long to add here. This line-up played all the memorable events and Psychedelic clubs arounds London in the period with all the famous bands, Soft Machine, Pink Floyd, Traffic, The Pretty Things, Arthur Brown and at one point Jimi Hendrix played guitar with them on stage – but it didn’t last and the band broke up.

Sam Gopal put together another line up, dropped the ‘Dream’ and found Ian Kilmister, (in the process of changing his name to Willis, his step father’s surname). He became their guitarist, singer and main songwriter. Roger D’Elia joined on second guitar and and Phil Duke became the bass player. The songs are mainly written by Lemmy, although not all credited here and as I don’t have a copy of the album it’s hard to check, but I do now that You’re Alone Now is the precursor to The Watcher, recorded by both Hawkwind and Motörhead.

This is a forgotten Psychedelic gem that also has a version of Donovan’s Season Of The Witch. Included here is the 1968 single Horse with the Willie Dixon song, Back Door Man on the B-side. A must for all Lemmy fans and/or Underground Psychedelic Sixties collectors.