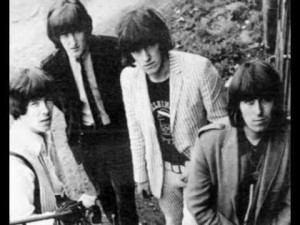 If we carry on going further and further back, we might find Lemmy playing clarinet in a Swing band! It was probably surprising for most people to see Lemmy playing guitar in the Psychedelic band, Sam Gopal but this might surprise you even more – before that he was the guitarist in the third incarnation of Blackpool Beat Group, The Rockin’ Vickers.

In order to get signed or even play regularly, Rev Black and The Rockin’ Vicars became, The Rockin’ Vicars and then The Rockin’ Vickers, in a world where blasphmeous Pop stars might be criticized (sound familiar). But this was 1966, it was illegal to be gay and dressing as vicars or Sami people (indigenous Scandinavians) might have been controversial. Pudding bowl haircuts could cause outrage – that’s like being threatened by a blancmange but in the sixties the establishment was under threat by anything that strayed from the accepted norm.

The Rockin’ Vickers were like a contemporary Beat Group and covers band featuring mainstays, lead singer Harry “Reverend Black” Feeney on vocals and drummer Cyril “Ciggy” Shaw. Stephen “Mogsy” Morris joined in 1964 on bass replacing Peter Moorhouse. Lemmy was their fifth guitarist, although in previous incarnations they had two guitar players, initially Ken Hardacre and Alex Hamilton in 1963 and Nicholas Gribbon and Ian Holdbrook in 1964. This might show Lemmy’s competence as a guitar player and as stated in an earlier post he didn’t join Hawkwind as a bass player, he became one.

I’m not too sure exactly which songs Lemmy played on, he allegedly wasn’t on Zing Went The Strings Of My Heart although it was released in 1966 the year he joined. He apparently did play on Dandy, a Ray Davies song, I particularly dislike. So I’ve posted Pete Townshend and The Who’s, It’s Alright to give you an idea of what they may have sounded like. They didn’t release an album in their time together and the band split up in 1967.

Note: As far as I understand it, Lemmy isn’t in the picture of the band holding the candles in the You Tube link below.