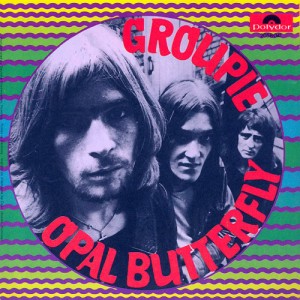 In the seventies in Liverpool (actually Birkenhead and The Wirral to those of you that know the area), I played guitar with some school bands none of which had very exciting names, I can’t even remember what they were called they were so insignificant. But for a short time one of them was called Opal Butterfly and we had some great songs that I can still hear in my head, We’re Not Listening, It’s Too Late To Stop Now, Jaguar…hm or was this later? See I don’t even remember, I’ll need to consult with band mate Dare as a lot of time has passed and anything seventies blends into one long strand. But the concept behind Opal Butterfly or should I say we were evolving from caterpillar to chrysalis (not the label) heading somewhere really good until one day in a record store I stumbled across a single in a picture sleeve. It was called Groupie by you guessed it, Opal Butterfly. This ruined everything, we left school got jobs eventually left the north west, but the core of the band, Dare and myself found ourselves in London. We changed the name of the band to The Something Sisters and then True 100’s and we became more of a New Wave sounding group (it was 1978 0r ’79). We made a three track demo with Biggles aka Pete Hinton the A&R man at French label Carrere records London office where I would coincidentally end up with my first UK release, after I somehow found myself signed to Carrere licensed from Australia in 1980 after moving there in April of that year. The chronology of this is probably a little mixed up and lacks cohesive detail but it was so long ago. It was in fact nearly forty years ago and forty years later I find myself writing about the real Opal Butterfly in the Lemmy music series I have been working on since his untimely death just after Christmas.

Opal Butterfly’s initial line up had Allan Love on lead vocals, Tommy Doherty on rhythm guitar, Robbie Milne on lead guitar, Richard Bardey on bass and Simon King on drums. This was the first time Simon King and Lemmy played together before meeting up again in Hawkwind although Lemmy was with the group very briefly and not in the initial line-up. I’m not completely certain if Lemmy even played on any of their songs – he certainly wasn’t on the first two singles.

There’s an early demo that I can’t date but one presumes it was recorded for CBS before an official single was released. Two Electric Prunes songs, I Had Too Much To Dream (Last Night) and Wind Up Toys were recorded. It’s poor quality but worth hearing, interesting to hear an English group interpreting this American band’s songs in that era. Their first official single was Beautiful Beige with Speak Up on the B-Side released by CBS in 1968. Sixties Psychedelic Pop complete with harpsichord and harmonies and drum rolls – nothing happened. Speak Up is more of a twangy Beat Group song that must have been way out of date by 1968. A follow up, a most enjoyable cover of The Who’s, Mary Anne With The Shaky Hand also failed to set the world on fire despite local interest in Oxfordshire. It sounds like it’s going to be Pretty Flamingo before turning quickly into Townshend’s classic, it’s just such a great song and lyric – I’m sure I don’t need to tell you what it’s about. The B-side My Gration Or? At over seven minutes long, it’s something of a Psychedelic epic and impossible to find although it appears on the Electric Sugar Cube Flashbacks compilation.

At this point CBS dropped them but they managed one more release, this time on Polydor. The single is listed everywhere as Groupie Girl (after the movie) but as far as I can tell it’s just called Groupie (see single cover). This is the single I have and it’s around this time that Lemmy was briefly involved, although I don’t see his picture on the sleeve (or even a picture of the whole band) but I do see Simon King there in the middle. This was another band that Lemmy was fired from but they didn’t last after he left. But they do star in the silly Groupie Girl film from 1970, Simon King appearing from 51 minutes if you’re interested, rhythm guitarist Tommy Doherty is credited but it looks like the others are not in fact Opal Butterfly members but actors. Lots of sexism and embarrassing out of date lingo, terrible acting, rotten script and naked seventies girls who are now in their seventies. Both Groupie and The Gigging Song are used in the film. Good luck if you want to try and get through it.