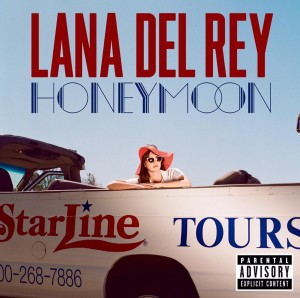 Another track and  video from Lana Del Rey’s latest album Honeymoon. The song features an extended five minutes of moody piano and floating submerged characters from the video. I say characters because I’m hesitant to call them actors or cult members, or mermaids or water nymphs or Lana’s friends. Anyway it might bore you but I always like a bit of art for art’s sake and one man’s pretentious twaddle is another man’s bid to try something different and in Lana’s case she might have given that thought closer consideration on her latest record.

After Ultraviolence, Honeymoon as an album struggles to equal the former’s giddy heights and consequently I’m still at the stage of investigating the album’s virtues and as yet can’t find the devil in it or the tease of previous efforts. By the way,  I find all the accusations of her being fake, can’t sing, all the stuff I’ve heard said, as completely missing the point. The unusual evocative quality of her voice is reason enough to dispel the criticisms and that precocious lyrical cool is simply unlike anybody else. So give her a break, not that she needs one, she is already a big success with her devotees, and who cares what anyone else thinks, I guess Eddie Van Halen lost little sleep about what fans of The Cure thought of Women And Children First. By the way her real name is Elizabeth Woolridge Grant, Alice Cooper – Vince Furnier, Freddie Mercury – Farrokh Bulsara, David Sylvian – David Batt and David Bowie…

For me Lana Del Rey lives somewhere between Quentin Tarantino, James Bond and Pedro Almodovar. If she was Spanish she’d be exotic and I suddenly realised who she looks like – Lady Penelope from Thunderbirds. She may even own a similar Pink 6 wheeled Rolls Royce limo and have a chauffeur named Parker with a licence plate Fab 1 or just Rey 1. She is an anachronism, if she’d been twenty in 1964 people of my age would love her now. She’s a model that can sing with a highly emotive voice that exudes atmosphere and that contemporary Pop sensibility that straddles that deep/shallow thin line rather brilliantly.

But the problem with Honeymoon for me is that it sounds like the ‘other’ tracks from Ultraviolence, it’s just not as good, it’s as if she has relied on the intriguing tragic fictional persona, she has created and has let the puppet work the ventriloquist. It’s quite unfair to put it that way but it’s her own fault, Ultraviolence was just so good – Honeymoon needed to be the album before Ultraviolence and I wonder if she knows why Honeymoon doesn’t live up to its predecessor? So we shouldn’t judge it as inferior but more that she has to challenge the songwriting to rise above her last achievement, demand more of herself because a lesser version of your last record isn’t where you want to be with your new album. Unless you are a fan like me and I simply forgive her.

Her love of faded Hollywood glamour, tragic romance, flowery dresses and machine guns, the fifties and California might need an experimental drug, a visit from an Art Deco space ship or that fickle trick of reinventing yourself without losing those unique elements that make you special. For now I will be joining her and Salvatore in a stolen Chevy convertible driving into LA as the sun sets on the strip listening to Italian Pop music from the sixties about to do something illegal.