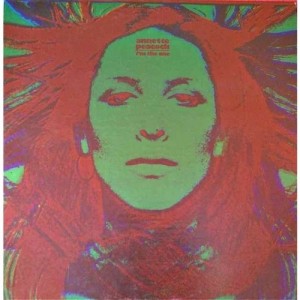 I’ve written about Annette Peacock before and whenever I hear her music I become transfixed by the pure scope of her vision. She can be sexy and avant-garde, sensitive and scary, catchy and experimental, she’s sixties, seventies, eighties, nineties and futuristic, a timeless wonder, she is Jazz, Blues, Electronic, Rap, Pop, Progressive, Singer/Songwriter, Poet, Funk, Rock, Soul – everything all at the same time, she is the lyricist, the composer, musician and the producer. Her last album 31.31 was made in 2006 (I can’t find it). Before that, An Acrobat’s Heart on ECM Records in 2000 was her first album in tweleve years. At this point she hasn’t released a new album for ten years.

Born in 1941, when she was just nineteen, Annette Coleman married Jazz bassist Gary Peacock. She toured with avant-garde saxophonist Albert Ayler and was friends with Timothy Leary. Free Jazz innovator Paul Bley began recording her avant-garde compositions in 1964, by 1966 they were married. Peacock’s first release was with Bley in 1968. On attaining a prototype moog synthesizer, Peacock is said to be the first to use the instrument to process her voice.

Her first solo album, I’m The One released in 1972 is impossible to categorise for all the reasons above. It’s a journey through so many worlds that you wonder if you are listening on Earth. It’s as if you have found an alien’s mixtape. On the album Mike Garson plays piano (you will remember him from his incredible performances with Bowie). Well known session musician Rick Marotta plays drums. Laurence Cook plays drums on Gesture Without Plot. Glen Moore and Stu Woods are on bass, Moore perhaps best known for forming the band Oregon. Tom Cosgrove plays guitar, Paul Bley plays synth and piano. Michael Moss is on tenor saxophone, Airto Moreira, Barry Altschul, Orestes Vilató and Dom Um Romão play percussion.

She inspired David Bowie, asking her to join him on Aladdin Sane – she declined but it has been said that Lady Grinning Soul is about her. Synth vocals on Something In The Air off Hours (1999) is Peacock’s influence. Mick Ronson recorded I’m The One and Seven Days. Al Kooper recorded Been And Gone on Naked Songs (1973). Eno, Pat Metheny, Busta Rhymes, J-Live, RZA, Ghostface Killah, Morcheeba have all recorded her songs. In 1996 Marilyn Crispell recorded an album of her compositions called Nothing Ever Was, Anyway for ECM. She has worked with Bill Bruford and Coldcut – her influence runs deep.

Her lack of success is more due to her genius than luck. She nullifies journalism, alienates her audience, polarises the public, confuses DJ’s, silences proper singers, she has no race or gender, no country, she intimidates with her passion, she smiles down at the hipsters and laughs at the icons, she is one of the greatest unknowns the world has ever ignored.

This is an article about a show she played in 2015:

In November 2015 she played with Sunn 0))) at Le Guess Who festival in Utrecht:

Interview from The Quietus here:

Another article about Annette Peacock on the In Deep Music Archive