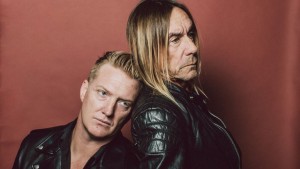 Iggy Pop has a new album, Post Pop Depression, a collaboration with Queens Of The Stoneage mainman Josh Homme. I found this video interview with Stephen Colbert and at the end he announces a performance, but can I find it on You Tube? No I can’t. If you can, please post it on the In Deep Music Archive Site.

There doesn’t seem to be a video for any of the songs on the album so I am just posting the third track, American Valhalla. I’ve only heard the album once through at time of writing but I immediately liked it. Sorry I can’t give you something more in depth after that microscopic review of XTC’s Skylarking. Today’s post is about awareness, not details.

See the interview below, you can see Iggy is a lovely guy. I met him once, he was carrying an umbrella in something of a distinguished manner and I can only describe him as, let’s think – yes, warm. I heard this is his last record – what a shame, whatever it is, he still has it.

At the end there is a video of  a young Iggy talking about his first solo album, The Idiot. (I bought it when it came out and I still love it). Here he talks about David Bowie saving him from Los Angeles.