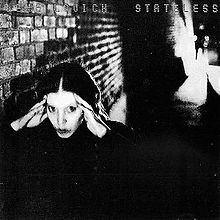 Anyone lucky enough to be 21 or thereabouts in 1979 will remember all the great New Wave hits between 1977 and 1980. One of them was Lucky Number by the inimitable Lene Lovich. She had the voice of an owl locked in a tree, the look of  a Dickensian 19th century doll dressed for a banquet in the Baltics in January and when she opened her eyes wide all the drawers in the room popped out of the furniture.

Lovich was born in Detroit to an English mother and a Serbian father. When she was 13 she moved to Hull in the north-east of England where she met Les Chappell her partner in love and music. She moved to London with Chappell in 1968 and went through a series of unlikely incarnations before landing a record deal with Stiff records in the late seventies. She released her debut album, Stateless in 1978 and the single, I Think We’re Alone Now written by Ritchie Cordell and a major hit for Tommy James And The Shondels in 1967 (No.4 US) but it failed to chart. (She also recorded a version in Japanese). The second single Lucky Number rose to No.3 on the UK chart, No.2 in Australia and Top Ten across Europe.

Stateless was an arty, odd, catchy collection of songs mainly written by Lovich and Chappell that captured the imagination of the British public both musically and visually. Her dramatic warble, wild hair style and angst ridden lyrics on tracks like Home and the surprisingly confessional Too Tender Tender To Touch that described a sensitive soul, were not immediately obvious in her demeanour.

Also in 1979 she collborated with Herman Brood Nina and Hagen in the Dutch film Cha Cha. Nina Hagen covered Lucky Number on her second album Unbehagen (1979) rewriting the lyrics in German. Lovich sang like a circus Patti Smith, whilst sounding completely like herself. She might have been a dark cabaret star, a vocal contortionist, flexible and at ease in fifties Sci Fi with sixties back beats, comfortable with synth or saxophone (that she played on the album) and easily slotting in with the current crop of Post Punk London hopefuls towards the end of the decade. She was signed to Epic in the US and Stateless was released with different cover art but she struggled to make progress across the Atlantic.

She sang Picnic Boy with The Residents as Sandy Sandwich. She appeared with Hawkwind and was part of a musical play, Mata Hari at the Lyric theatre in Hammersmith. Through all this creativity, slotting in and out of different rolls and after releasing two more albums with Stiff, Flex (1979) and No-Man’s Land (1982) she didn’t make another album until March (1989) and choosing to concentrate on her family it was another fifteen years before her next album, Shadows and Dust (2005). In 2006 she appeared on stage with The Dresden Dolls. It’s been eleven years since her last album.

After Lucky Number the surreal space cowboy, Say When reached 19 in the UK chart but future singles didn’t crack the Top 30. Her songs might have been too broad, a sixties girl group song called Tonight made you wonder what year it was and One Lonely Heart might have been a German song (her real first name is Lill- Marlene). One In A Million could be from a Broadway show. She was probably more comfortable as a singing stage personality in left of centre productions or in pantomime scaring the kids.

Continuing the thread of strong women, for me, her eccentric voice and a handful of special songs (New Toy) always keeps me interested and I will always investigate her art in whatever form it should appear. As recently as 2013 she began touring with a new band and has announced dates in Europe for 2016.