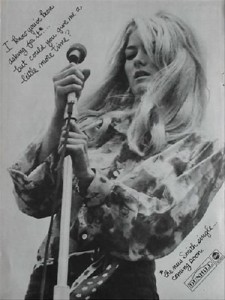 Last weekend there was major record fair in Solna near Stockholm. As I was browsing (looking for Shocking Blue albums) I came across Gayle McCormick’s first self-titled solo album from 1971. I have the first Smith album so of course I bought it – tragically three days later, she died

It’s A Cryin’ Shame was a small hit from the album in 1971, McCormick went onto release two more solo albums, Flesh And Blood (1972) and One More Hour (1974). All the albums were on different labels and you got the feeling that she was chasing the success that she had with her band Smith, a cover of The Shirelles’ Baby It’s You reached the US Top Ten in 1969. The song was also covered by The Beatles and Chilean Psychedelic Blues band Aguaturbia. McCormick  was never able to emulate her past glories and after the third label couldn’t reignite her appeal she married and settled in Hawaii and that was that. Although she did release a single for yet another label and contribute some backing vocals to a Waylon Jennings album, at some point she returned to her birth place, St. Louis.

In the video she is the archetypal sixties chick, headband, chunky ring, fringes, flairs, earthy green and brown colour scheme and singing that Soul/Blues/Pop that seems so reminiscent of the period. I guess she’s singing live because she doesn’t quite make the high note. Hammond, grooving bass and drums and guitarist Rich Cliburn (I presume) dressed to kill with the best fringe jacket, the best flairs and a great hat. Is that a Fender Telecaster or something earlier with that strange diagonal pickup?

Baby It’s You was written by Burt Bacharach and Luther Dixon with lyrics by Mack David (Hal David’s elder brother) and was a hit for The Shirelles in 1961 reaching No.8 in the US chart. It was covered by The Beatles on their debut album Please Please Me (1963) and sung by John Lennon. I imagine that he loved that part where it goes “Cheat Cheat” (probably a Harrison/McCartney backing vocal). He sings the song like a true dramatic late fifties Pop star, and as shown by his Rock ‘n’ Roll album, it was an era that he was extremely comfortable with as a singer and loved as a fan.

Whilst Smith were together as a band, Gayle McCormick shared lead vocals with Rich Cliburn (lead guitar) and Jerry Carter (bass), Larry Moss played organ and drummers, Robert Evans and John Horrigan replaced each other but I don’t know which way ’round. They also had another guitar player, Alan Parker. Smith released two albums, A Group Called Smith (1969) and Minus Plus (1970) before McCormick went solo. They recorded a cover of The Band’s The Weight for the Easy Rider soundtrack (1969) as The Band’s version from Music From the Big Pink (1968) wasn’t available for contractual reasons. Although the song appeared in the film, the label Dunhill weren’t given permisson to use it on the soundtrack album, Smith were contracted to the label and were asked to record a cover version. As a lot of their material was already covers it worked out perfectly for everybody although despite their early chart success nobody remembers them.

Rest in peace, Gayle McCormick who has died at the age of 67. Condolences to friends and family.