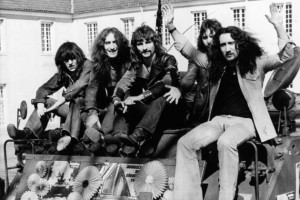 Along with ELP, Uriah Heep were one of the most  pilloried bands of the era by anybody outside the genre. So luckily, they were the first band I saw live as a teenager in the mid seventies at Liverpool Stadium (actually it was the support band Maldoon). Why was I lucky to see a band that people queue up to despise? Well, I could go on about tolerance, horses for courses, different strokes for different folks and all that jazz but it was more that, I didn’t ever get caught up in the cool crowd, I didn’t go along with the NME and the Punk hatred. What has the press creating and destroying a scene got to do with me and what music I like? As Oscar Wilde said “A cynic is the man that knows the price of everything and the value of nothing”. Which led me to this little gem: Cynicism is a term which originally referred to the ancient Greek philosophy of the Cynics, often considered to have been founded by Antisthenes. Currently, the word “cynicism” generally refers to the opinions of those who are inclined to reject appearances of sincerity, human virtue, or altruism, and maintain that self-interest is the primary motive of human behaviour. The most extreme forms of cynicism can lead to anomie and nihilism.

I really don’t care that Marc Bolan has more cred than Uriah Heep despite different degrees of innovation, lyrical splendour and musical ability – we all know what happened to poor old Marc’s vision before his tragic death. Sadly Marc Bolan wasn’t the only one to lose his life early. Dave Byron, Uriah Heep’s singer was dead at 38 from a heart attack due to his excesses. New Zealander and bass player Gary Thain died of a heroin over dose at 27. Bolan’s death was a real accident as was his bass player Steve Currie (choking on a cherry stone) at 33 and Tyrannosaurus Rex multi-instrumentalist Steve Perigrin Took (another car crash) at 31. Percussionist Mickey Finn died of cancer at 55. Drummer Bill legend must sleep with the light on. But whereas Thain and Byron chose a path that destroyed their lives through addiction (another disease) they triumphantly carried the banner of their musical vision to the pleasure of large audiences everywhere they went. After Bowie, Trevor Bolder from The Spiders From Mars spent most of his adult life as Uriah Heep’s bass player. T.Rextasy honorably keep the legend of Marc Bolan alive. 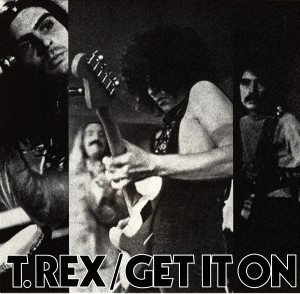 Unfortunately I couldn’t find a. T.Rex track with “Tears” in its title (that would have been perfect) but beyond pub arguments, internet spats, trolls or even simple disappointment with the quality of someone else’s work there’s no accounting for seeing something in a band that has been universally panned. When Rolling Stone reviewed Uriah Heep’s debut, that forgotten journalist promised to commit suicide if they made it. (I think T.Rex may have supported Uriah Heep somewhere but in those days disparate bills were the norm, reflecting individual ticket sales and popularity but the hierarchial aspect was ephemeral. It was more interesting having different kinds of music than an opener that sounded like the headliner as is the norm now.

I always had a soft spot for Def Leppard (obviously) whilst I always thought the guitar solo in Purple Rain was terrible (I feel so very alone with that opinion). I also thought Elemental Child was exciting guitar for people who didn’t actually play guitar – Karen Carpenter’s voice floored me. Whilst finding myself on the same side as the critics in regards to Television I couldn’t go along with the general opinion that The Clash were saviours. Later I was lucky enough to play on a Tom Verlaine solo record (The Wonder) Patti Smith’s drummer Jay Dee Daugherty and I managed to not be credited. As part of the band that played a US/UK Punk tribute show at the Bottom Line in New York, Steve Goulding from The Mekons and drummer in the band, helped me appreciate The Clash beyond London Calling by saying “You don’t like the Clash, really?”. I did of course play with The Saints and thought they had better songs.

Tears In My Eyes comes from Uriah Heep’s third album, Look At Yourself and isn’t my favourite song from that album, it just happend to have “Tears”in the title, a continuation of the recent theme. As the critics were screaming about Dave Byron’s vibrato and meaningless lyrics, I was rather enjoying the fourth form poetry in this musical context whilst a poodle in platforms ponced around the stage in a red suit that might have looked better on Raquel Welch. I was after all not long out of the fourth form and had my own pink suit that my parents had to buy for me from Burtons in Chester to go on a school trip to London. Don’t ask me why it was pink? A taste of things to come is the only explanation. As the  times were dictating to the youth and we all had to shake off our parents and elder siblings influence there was no way they were going to like Uriah Heep and The Sweet’s audience was far too hysterical. As it hapened I deviated from the Rock groups of the day – Deep Purple, Black Sabbath and Led Zeppelin and soon discovered Hawkwind, Neu, Amon Duul 2 and of course CAN whilst enthusiastically singing the chorus to Love Is Like Oxygen.

I found it impossible to dislike Jeepster whilst listening to Led Zeppelin 4 and Virginia Plain whilst listening to Octopus by Gentle Giant. Around me people were choosing sides. I was unaware there was a war. I used to hear that when people went around to someone’s house, that person would make sure that certain records were on view and others hidden. Ha Ha! Can you imagine such a thing, oh no they are going to discover that I like Budgie, certain death. It took Nirvana being hip and namechecking Black Sabbath before they once again found favour and it might be uncomfortable to know that King Crimson’s Ian McDonald played sax on Get It On and Yes’ Rick Wakeman, the glissando piano. I find the idea that there are actual taste makers out there rather disturbing, you are being manipulated. They’re having a laugh behind the scenes at the hipsters expense. Not all of you of course, but Rolling Stone became the worst magazine, St Marks in New York, the worst street, Punk, the torch bearer of hypocrisy whilst Mick Box Uriah Heep’s guitar player and only original member (the nicest fellow by the way) to his chagrin, never changed, never wavered and without being a virtuoso forged his own sound and has endured. Still, some of you really hate Uriah Heep with a fistful of good reasons. But we can’t value the opinion of someone that loves Bob Marley when they’re telling us that Rock music has no meaning. But younger people, to paraphrase broadcaster Frank Skinner “are exposed to that limited period when the portal of their youth opens and keeps their taste in their special era of influence”, those people have never been more open minded and will happily listen to Tarkus by ELP and then Arctic Monkeys, although they might get over Arctic Monkeys first.

Although I am sometimes disappointed in albums that I expected to like (Dave Gilmour’s Rattle That Lock) I don’t really care about what I don’t like. I gave Butler and Anderson’s record a slight roasting because it’s really nowhere near as good as it should be and they surely know it. This loyalty to a certain set of musical principles, demanding particular reference points, certain perimeters, can soon turn into confines and make you closed minded – like I am to mediterranean vegetables. I simply cannot believe that people say that there’s no good music, it rather paints a lazy and ignorant picture, it was you that closed your portal, it can’t the sixties or the seventies or the eighties etc forever – and there will be a generation that sorely misses Beyoncé. Be glad you’re not a classical enthusiast, can you imagine what they have to go through as they walk the streets, go into shops or watch television.

So before I go and listen to the rest of Look At Yourself, Grand Funk Live or Hysteria by Def Leppard, I might just have a listen to Beck’s Morning Phase or Ray LaMontagne’s Ouroboros or Amanda Bergman and Amason and of course my favourite FKA Twigs. “Well you’re dirty and sweet Clad in black don’t look back and I love you”

Note: Don’t watch the July Morning video it’s just someone with a camera driving along a road.