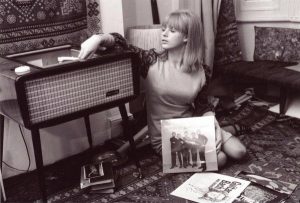 Christmas comes but twice a year and the familiarity of men sporting beards carrying sacks has you wondering if the black vinyl maybe coloured by soot. Queueing at the crack of dawn for the exclusive, limited edition vinyl, numbered gatefold that you may already have in your collection but not in this pristine condition with the French cover and the extra track recorded in the drummer’s bathroom. There are women here too but it’s mostly men, why is that?

It rained today, previous Record Store Days have been sunny and warm but April is unpredictable and a mean spit of chilled diagonal wet arrows fell on a slight wind that inspired blood in the cheeks, wrapping up in scarfs and buttoning the jackets that yesterday were obsolete. Frozen faces stare out from under black hats, eyes that can’t decide excitement or desperation as the chill pushed indoors towards the prize, shuffling like dishevelled explorers combing the tombs in search of treasure.

This year’s list throws up some semi-desirable items – The Idle Race, Big Star Live, Traffic, Tom Petty Live, Grateful Dead, The Kinks Live, Agneta Fältskog from the sixties and Made In Sweden from the seventies. A triple album of Emmylou Harris’ Wrecking Ball, Dead Can Dance, Magazine, Zombies and a few other items of moderate interest in 7 inch and 12 inch formats (I’m not going to list them all here) and different countries have different lists reflecting their own marketplace but ultimately I wonder, who chooses what to put out and really, where’s the imagination? Where’s the unreleased archive? The gems that flounder in the vaults of the major labels, unreleased albums, unreleased songs, different takes and what about the unreleased groups? There must be thousands of titles for which Record Store Day would be the perfect opportunity, all the nerds in one place at the same time queuing up from 8AM around the world for Noel Gallagher’s El Mexicano 12 inch? Can’t they do better than that? Grace Jones Private Life, Hendrix Smash Hits with the cowboy cover and no Burning Of The Midnight Lamp? My favourite track. This could have been so much better.

I understand that rereleasing obscurities in pressings of 500 copies can be expensive if they don’t sell, but this is the day that they will sell – if the price is right. Does The Bevis Frond have to be three hundred and fifty nine kronor, that’s forty four dollars or thirty one pounds? Seven Bryan Ferry singles, seven hundred and ninety nine kronor, nearly seventy pounds, nearly a hundred dollars, it’s too much money and seven Bryan Ferry singles isn’t exactly every record collectors dream come true.

This is a job for me and for Henry Rollins, he wrote about this last year. We are musicians that have a wide knowledge, are passionate about music and like to collect records, we should be given the job of scouring the archives of record labels for next year’s Record Store Day release, you know where I am and you can surely find Henry Rollins.

In the meantime the stores are packed full of people, crammed, sardines and at the end of it all we still have exclusive records left over and of course some titles sold out, but the range should be wider and deeper and more obscure, more real rarities, and we are all waiting come rain or shine, starving, drooling at the thought of what lies in hermetically sealed rooms below a Record Store Day label department that doesn’t care enough to investigate. The record stores are already in big trouble, this day was supposed to help rescue them, so how about more effort to make this day an even bigger success economically for the stores. The dedicated music lovers are out there, willing to part with their hard earned cash, a captive audience, respect them and give them what they want – that is, things you don’t know you have.