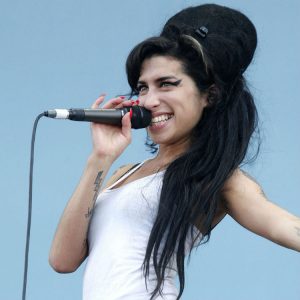 Amy Winehouse sings, “I fuck myself in the head with stupid men” a lyric from her song Tears Dry On Their Own, featured on her second album Back To Black released in 2006. When she died in 2011 in an atmosphere of the inevitable and although the mainstream had discovered her and the press couldn’t get enough of her, it hadn’t really sunk in to my thick skull what a terrible loss it was. Her voice was beyond compare although Tony Bennett put her in the same bag as Dinah Washington, put her in the super league of legends, something that seemed to annoy some, as if she was that good – she was better. If she’d been around in the fifties her legend would be secured whereas now the whole world has to shake off something of a shallow image of her despite the bleedin’ obvious.

When I saw the film, Amy, I realised that all the hoo hah around her had turned me away from her, plus I didn’t really like her best known song Rehab. The film completely turned my opinions about her upside down. This vulnerable, spirited and talented woman was hounded by the press, journalists in her face 24/7. Yes she was fiesty and she put herself in dumb situations all the time but she was a FANTASTIC singer. You must remember something else about her that I’m not sure people realise – she wrote the songs.

I wasn’t going to feature artists that the whole world knew about in my thread about ‘tears’ but it’s impossible to ignore her raw and natural talent, a talent that in the case of the legend that is Janis Joplin, that the mainstream would recognise as well as the underground, this has yet to happen for Amy Winehouse. Sadly with Amy (you do need to call her by her first name, like Janis) she doesn’t cross over, you can’t connect Psychedelic music to her music, they are too far apart, different sensibility, different drugs. There’s no Folk Rock here, it isn’t Glam, it’s hardly Progressive Rock but despite a lot of the music that inspired me to make music myself being quite different, I can’t ignore her. But then I like Jazz singers, Soul Music, Funk, Reggae and R&B, I like Black music and she was a sensation.

The media’s interest was motivated by the delicious spectacle of fame falling flat on its face and after seeing the film, the personal relationships with family and lovers exacerbated her tragic demise. Watching her react to her fame was uncomfortable, sometimes she was like a small child, other times a sexual beast and then a tragedy as she was when she was apparently too drunk to perform for 20,000 people in Belgrade.

Amy Winehouse at her best was one of the greatest British singers that ever lived and I for one will be moved and inspired by her greatest performances for evermore. RIP Amy, missed doesn’t really cover it.