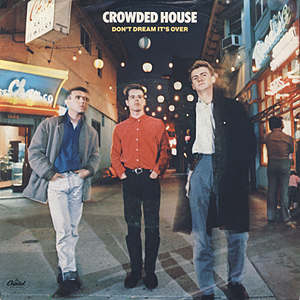 Crowded House saw massive success with their self-titled debut album despite their label’s choice of singles. Their major hit, Don’t Dream It’s Over was released as the fourth single from the album as if the label knew there was something good about the band but weren’t sure exactly what it was, releasing the songs in order of track listing untill they got to Don’t Dream It’s Over – thank the lord it wasn’t the eleventh track.

Don’t Dream It’s Over reached the No.1 spot in Canada and their home country, New Zealand. The song was a hit all over the world but the No.1 spot eluded them in America. The cheezy Gospel Pop song, I knew You Were Waiting For Me by Aretha Franklin and George Michael kept them off the top. Who buys this stuff?

I was terribly saddened when Paul Hester took his own life in 2005. Whenever I met Paul he was always so friendly and easy going but those that knew him well knew he was prone to bouts of depression. I saw Crowded House live once in Los Angeles at the Wiltern Theatre, Paul was hilarious, the songs were strong, the band was effortless. I also supported them once at The Tivoli in Sydney when ex Reel, Craig Hooper was still in the band and they were called The Mullanes, that was a long time ago.

I’ve always been an admirer of Neil Finn’s writing, he is one of the great contemporary Pop writers of our time, I love his songs, his aesthetic, his ability to find a melody that you haven’t heard before and immediately have you hum it all the way to greengrocer’s. And Nick, if you’re reading this, hope to see you in Ireland at the end of July.

Now I’m towing my car
there’s a hole in the roof
my possessions are causing me suspicion but there’s no proof
in the paper today
tales of war and of waste
but you turn right over to the T.V. page