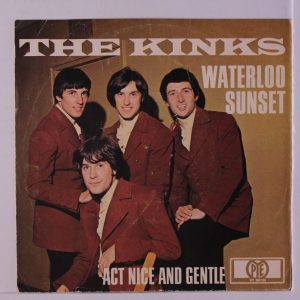 Undeniably one of the great songs of the sixties, The Kinks’ Waterloo Sunset stalled at No.2 on the UK chart, unable to dislodge The Tremeloes Silence Is Golden from the No.1 spot. In America it didn’t chart at all, blame laid on the quintessentially English lyric – so explain Our House by Madness No.7 in the US in 1982.

There’s a lot of unexplained Kinks contradictions in regards to their success because despite that overt Englishness, as the sixties drew to a close it was the American public that took them to their hearts as they became a major touring band throughout the USA in the seventies. You can read all about it here:

After two warm and wicked shows in North Carolina and an early morning drive to Knoxville, Tennessee gnawing at my elbow, I can only slip my eyes under my eyelids, let gravity sink my head into my pillow, draw up the multi-coloured blanket and succumb to a slow dissent into unconscious mystery.

Other Kinks posts on the In Deep Music Archive web site:

To end this post on a fascinating fact, the song was originally called Liverpool Sunset inspired by Merseybeat and Ray Davies’ penchant for his other favourite city in England.

Dirty old river, must you keep rolling, flowing into the night
People so busy, make me feel dizzy, taxi light shines so bright
But I don’t, need no friends
As long as I gaze on Waterloo Sunset, I am in paradise
Every day I look at the world from my window
But chilly, chilly is evening time, Waterloo sunset’s fine.

Terry meets Julie, Waterloo Station, every Friday night
But I am so lazy, don’t want to wander, I stay at home at night
But I don’t, feel afraid
As long as I gaze on Waterloo Sunset, I am in paradise
Every day I look at the world from my window
But chilly, chilly is evening time, Waterloo sunset’s fine.

Millions of people swarming like flies ’round Waterloo underground
But Terry and Julie cross over the river where they feel safe and sound
And they don’t, need no friends
As long as they gaze on Waterloo Sunset, they are in paradise
Waterloo sunset’s fine