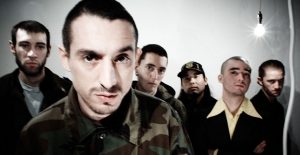 Like a gang of drunk Millwall supporters tumbling out of The Residents tour bus, Fat White Family are a terrace full of contradictions. Hailing from Peckham in South London their anarchic brand of relevant noise has you applauding as you curse them. All flesh, fags and beer, angular guitars, screaming and songs that make Happy Mondays sound like The Carpenters, one wonders what is it exactly that drives followers into a frenzy? Attitude and missing teeth notwithstanding, it’s hard to tell if they have just been released from borstal, rebelling against Dad’s second BMW or just having a lark.

All this irreverent behaviour sells them solidly to their audience but musically with Saul Adamczewski (minus that front tooth and shirt) drenched in vocal reverb and other singer Lias Saoudi shirtless in attack throat mode, they create a discordant beauty to scare the neighbours and threaten civilization with brutal reality. But somewhere in there they evoke the ghost of early Pink Floyd, a psychedelic psychosis reminiscent of Careful With That Axe Eugene where heads will most certainly roll.

Playing songs from their two albums Champagne Holocaust (2013) and Songs For Our Mothers (2016) one wonders how they’ll keep it up finishing the set with Bomb Disneyland and with no encore retreating to the dressing room to get stuck into another crate. Although it’s impossible to decipher their lyrics one expects that they may be sharing some pearls of ironic wisdom through a cacophony of vicious harmony.

One last thought, if they haven’t yet managed get your attention, offend you or inspire disdain, then this video from their 2013 single should do it. You could of course simply see them as ‘special’ and if  you are a fan of Ralph Records, The Fall, The Beta Band or Lone Pigeon then they come highly recommended.