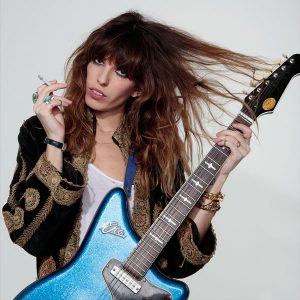 When I think of my poor old Dad worrying that I wouldn’t be able to stay alive in London when England were playing Scotland on the same night as Led Zeppelin in 1973/74 and consequently telling me I couldn’t go even though I had tickets, I was crestfallen.  Missing most of Lou Doillon’s  set  tonight might not quite equal Led Zeppelin at Earl’s Court playing Houses Of The Holy or even the time that I missed the one chance to see Bowie in California because I was sick or perhaps the last Pentangle show in London at the Lyceum with tickets left and the box office closed and the gig just started and being told nope, too late, sorry. Maybe missing Frank Zappa at the Deutschlandhalle in 1977 and having to hear it from the outside was worse or even missing Savages last show in Stockholm because I was helping remodel Pet Sounds and I just forgot, but missing Lou sing ICU and Devil Or Angel was frustrating – I guess I’ll get another chance and when I do I’ll be there when they open the doors.

I was so sick with food poisoning yesterday that today was always going to be a struggle and I did see her play a few songs, growling and purring her way through her mouthful of extra teeth like an erotic lioness. When she talks she has that beautiful clear English voice that Jane Birkin, her Mum has but when she sings her words are hidden in her private mysteries and tangled histories. She swallows her words like emotional pills and spits them out considered, analyzed and presented back to the audience as a solution – a trembling vibrato punctuates her Phd in human observation.

She stands and plays a space-age Eko electric guitar, an acoustic guitar, or she sits behind the piano, at other times she lets the band thrash it out standing confident at the front of the stage expressing lyrics with subtle body movements and shaking her hair, immersed in the music. She has the charisma of an actress, with the demeanour of the queen of an ancient forest whilst never losing a French sophistication that is somehow imbued in the songs despite the English lyrics. She’s sensitive, alluring and her special beauty makes her gorgeous songs even more seductive as she repeats melodies and sells you the same idea so tasty that you never want her to change the recipe.

It’s hard not to fall in love with her, her easy philosophy on life that comes out in the introductions to her songs, a natural empathy, a thread of unique skills that crosses over from fashion to musician to actress whilst being the daughter of a celebrity (her father is French film director Jacques Doillon) and herself a mother,  humbly winning a Best Female Vocalist French Grammy in 2013. At the end of the night her joy at the reaction of the audience fills her full of joy and you hope that she doesn’t suffers too much pain for her next batch of songs for which I am eagerly waiting.